Local YMCA Named Employer of the Year by Down Syndrome Congress 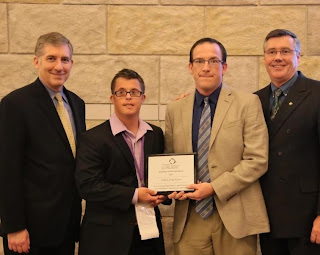 By Emily Roehler from NTV ABC:
The National Down Syndrome Congress has honored the YMCA of the Prairie in Holdrege with the 2013 Employer of the Year award.
The Y was nominated by the family of employee Creighton Wall, who has Down Syndrome and has worked at the Y for seven years.
CEO Jeff Morgan and Creighton Wall received the award at a banquet on Saturday, July 20, in Denver.
"We are honored to be among past award winners such as Walgreens and McDonald's Corp. in the support of employing those with Down Syndrome or other disabilities," YMCA CEO Jeff Morgan said.
Other past winners of the awards include large employers such as Sears Roebuck, Marriott Corp., Target Stores and the University of Alabama.
James A. Faber, president of the National Down Syndrome Congress, said, the Y's "support of Creighton Wall, and the consistent, well-applied instruction, guidance and evaluations help him to be the best he can be."
Wall's parents noted the loving and accepting environment their son was a part of at the Y and that he was treated as a valued employee.
Creighton started at the Y as a volunteer and was hired as an employee in the house-keeping department when the new Y opened in 2006. He also has led a walking club at the Y.
Creighton said he likes working at the Y to meet new people and stay motivated to maintain his health. It's also something he feels called to do.
"I love the Y, and God called me to work here," Creighton said.
Posted by DSD at 6:00 AM

Email ThisBlogThis!Share to TwitterShare to FacebookShare to Pinterest
Labels: award, Down syndrome, Employer of the Year, NDSC, YMCA