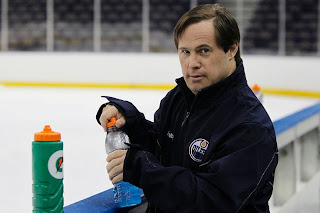 by Tom Braid from the Edmonton Sun:
Sometimes the simplest question can receive the most powerful answer.
"Thank you very much ... (for) my life."
That's how 49-year-old Joey Moss -- who has Down Syndrome and who has been an Edmonton Oilers' dressing room attendant for 29 years -- responded when asked what he would say to Wayne Gretzky if he had the chance now.
Stephen Moss, Joey's 45-year-old brother and guardian, says Gretzky positively changed not only Joey's life but that of the Moss family.
It all began when Vickie Moss, Joey's sister, met Gretzky one night in 1981 when she was singing at a local bar.
"He comes into our lives, this is where Wayne's pixie dust sprinkles," says Stephen.
"Everything blossoms, we have a better life, way better, absolutely magical."
First thing, says Stephen, "He gives my mom a job, in charge of his fan mail."
In 1981, Gretzky had up to 20,000 pieces of mail come in garbage bags ever week.
Sophie Moss had been a widower since 1977; she was "scraping by" with three of her 13 kids still at home.
With the fan mail job, she made extra money to support the family.
Then, in 1984, Joey followed Stephen into the Oilers' locker room as a staff member.
Wayne had previously asked Joey if he was happy at his bottle depot job and Joey answered with his exuberant "YES!"
That aside, Gretzky suggested that Joey try out in the dressing room. Joey was a hit.
Then, at the end of the 1986 Oilers' season, The Great One called up the Edmonton Eskimos' equipment manager, Dwayne Mandrusiak, and asked him if Joey could work with the CFL during training camp.
It might have been Gretzky who opened the door, but it is Joey's tireless work ethic, dedication and love he shares with everyone that keeps him employed by both teams to this day.
If you lived in the Capilano area in the 1980's, you might have even spotted Gretzky playing road hockey with the Moss family.
"Joey was always on Wayne's team; Joey is a right-handed shooter like Kurri. Wayne would set Joey up with his feather passes and he would put it in the net, it was fun," said Stephen.
When Gretzky was traded in 1988, he bought Joey a big-screen TV and a satellite system so Joey could watch his games for the rest of his career.
In 1988, with the money raised by his past golf tournaments, Gretzky then established 'Joey's Home Trust,' managed by the Winnifred Stewart Association.
By 2007, the trust built Joey's Home, a $1.5 million, 12-unit, facility that provides a home for eight assisted living individuals and which has four independent living apartments. The association runs a total of 12 community living homes.
"I have had many dreams and wishes to just have Wayne all alone, to thank him for everything he has done," adds Stephen, his voice cracking.
He wants to tell Gretzky directly: "You made our lives better and stronger, thank you so much."
But, he adds, "I don't think he would want to hear that 'cause he's just ... just Wayne."
tom.braid@sunmedia.ca
@SunTomBraid
Posted by DSD at 6:00 AM