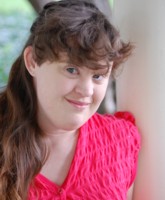 from The Hollywood Reporter:
People have been killed in that house. Possibly a lot of them. The house is also seriously haunted. We know this because people keep telling it to the Harmons, who refuse to leave even when it’s pretty clear everybody is right. In fact, a neighbor girl, Adelaide, flat out says they’re all going to die in the house. (Adelaide is the first person we meet in the pilot. She’s played by a young girl with Down Syndrome. She’s later portrayed by actress Jamie Brewer, who has Down Syndrome. And Glee fans know that Murphy has used two other actresses with Down Syndrome, Lauren Potter and Robin Trocki, in that show. Murphy’s former FX series, Nip/Tuck, had a Season 3 story about a Down Syndrome man – played by Blair Williamson – who wants to have surgery to look more like his parents.  This is obviously a trend, but what its deeper meaning is, who knows). Adelaide’s mother Constance (Jessica Lange, easily the best element of the series) frequently calls Adelaide a “mongoloid,” which is uncomfortable, though Constance is an obviously deranged, mean and certainly dangerous mother.
from The New York Times:
If one actress with Down syndrome doesn’t provide enough Tod Browning-style otherness for you, don’t worry — there are two.
from Hit Fix:
You want to throw out all the goodwill you generated on "Glee" by writing three-dimensional characters with Down syndrome and give Lange's character a daughter with Down's who's there only as creepy set dressing? Have at it!
from Variety:
So in they move, only to be warned by their neighbor with Down's syndrome (Jamie Brewer), "You are going to die in there" -- which, in its vague echoes of lines from "The Exorcist" and "Poltergeist II," represents the first homage of many in Murphy and Falchuk's script.

from ABC News:
The house also comes with strange neighbors. Jessica Lange plays Constance, a busybody Southern belle with an even more intrusive daughter, Adelaide, who (like Jamie Brewer, portraying her splendidly) has Down syndrome. Adult but childlike, the irrepressible Adelaide keeps busting into the Harmon's home.
"Addie will always find a way in," Constance tells Vivien matter-of-factly.

from Ranu's Reviews:
I am intrigued and at the same time in love with the supporting cast more so than the main stars. How could one not be in love with two-time Academy Award-winning actress Jessica Lange? She plays next-door neighbor and former Southerner, Constance. There is something up with this chick. She has a daughter, Adelaide (Jamie Brewer; Young Adelaide played by Katelyn Reed), with Down Syndrome who she often refers to as a Mongoloid, yet the super laid-back Constance will open a can of whoop-ass on you if she feels you have slighted her kid. 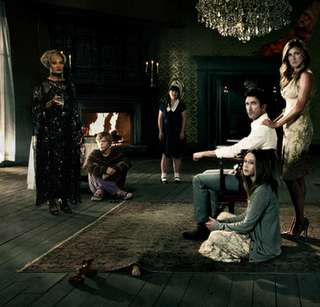