Children with Down syndrome are trained up by fire crew 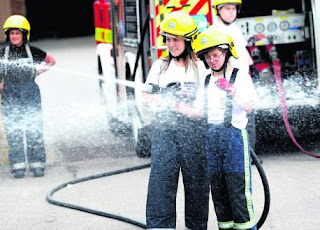 by Matthew Edwards from The Swindon Advertiser UK:
YOUNG people with Down syndrome have been finding out all about the emergency services as they put out fires, cut people out of cars and drove around with the blues and twos on.
A group of young people have taken part in the Salamander Project and spent the week with the Wiltshire Fire and Rescue Service to experience a basic fire and rescue training course.
The programme, held at Drove Road Fire Station, encourages participants to work as a team, while building up confidence and self-esteem.
Yesterday the group put on a display of their new-found skills for family, friends and senior fire officers which included cutting casualties out of cars and climbing ladders to save a woman from a burning building.
Sixteen-year-old Stephen Thomas was taking part in his fourth course and said that he had grown in confidence since he first started.
He said: “I have enjoyed the course because of all the different things we have done. My favourite part was at Coate Water where I was able to jump in the water.
“When I started I was a little bit nervous but I have enjoyed working with the emergency services and the display was a lot of fun.”
Watch Manager Mark Evans, who runs the course, said previous Salamander courses for the Down’s Syndrome Group had been the highlight of their year and they have been running the course for the past four years.
He said: “For the fire service it is an opportunity to work with the a group of young people that we normally wouldn’t see unless they are in an accident.
“It gives us a chance to show them that we are not just a uniform but we are there to help them.
“Apart from all the fire service advice they get I think they get a sense of satisfaction to see what they can all achieve.
“Since we started you can see the changes in the young people, year on year, and we only see them for the week.
“It is also the feedback we get from the parents and the teachers which is so nice to hear.”
The group needs to raise £5,000 a year to be able to send the young people on the course and this year it was made possible by a £2,000 donation from the Co-op Community Fund and a £1,000 donation from the Woodward Charitable Trust.
Group secretary Jo Messenger said: “It is a fantastic week and it means everything to those who take part.
“It helps to grow their confidence a gives them an enormous sense of pride when they complete the week.
“You can physically see them grow through the week and whether they do something small or big it all counts and if they see someone in front of them doing something they always want to do better.
“We are so thankful to the companies that have donated because we are reliant on funding and this would not happen if it wasn’t for them.”
Posted by DSD at 12:09 PM