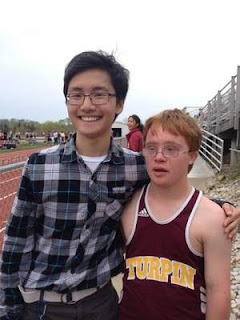 from Cincinnati.com:
If you’ve ever wondered where the leadership of the millennial generation will come from, look no further than Kyle Denman of Colerain, the 2013 YMCA of Greater Cincinnati Youth in City Government program’s mayor of Cincinnati.
The St. Xavier High School graduate recently made Ohio history at the YMCA Conference on National Affairs in Black Mountain, N.C., as only the second Ohioan to present a proposal in front of the 700-plus delegates and the third Ohio resident to be selected as a presiding officer.
Denman’s presentation was titled “Daniel’s Proposal,” and involved an amendment to the Individuals with Disabilities Education Act, designed to make school easier for students with disabilities.
His decision to work on this proposal resulted from a close friendship he has with a young man named Daniel from Anderson Township. Daniel has Down syndrome.
“I did this work to speak for those who cannot speak for themselves,” said Kyle. “I don’t see Daniel as having Down’syndrome, I see him as being downright awesome.”

Kyle spent the past year researching the Disabilities Education Act, and spoke with organizations and members of special needs programs to discuss how things could be improved at school for those with special needs.
The YMCA supports the development and well-being of people with disabilities through a range of programs and services that address both specific needs as well as opportunities to integrate people with disabilities into our general activities and programs.
Every year at the conference, hundreds of delegates from Youth in Government programs across the country gather for an educational experience. Each delegate prepares a suggestion for a possible law to be debated at the conference and only the top ten proposals are selected to be presented in front of the entire delegation.
Denman will attend Miami University this fall. Daniel attends Turpin High School in Anderson Township.
Posted by DSD at 12:30 PM