For Kids With Special Needs, More Places To Play 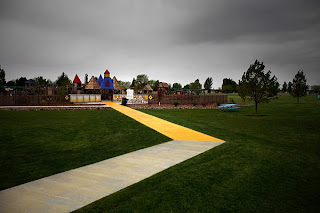 by Robert Benincasa from NPR:
Remember running around the playground when you were a kid? Maybe hanging from the monkey bars or seeing who could swing the highest?
It wasn't just a mindless energy burn. Many have called play the work of childhood. Play teaches children how to make friends, make rules and navigate relationships.
But for kids whose disabilities keep them from using playgrounds, those opportunities can be lost.
New federal requirements under the Americans with Disabilities Act are changing the landscape for public playgrounds, requiring them to include equipment, materials and designs that provide children with disabilities the same play opportunities as typical children.
But as NPR sought to explore the effects of the new rules, it found that parents and advocates are making the real difference — not the federal government.
The higher cost of "inclusive" playgrounds means many local governments can't afford them. And in places that do offer the kind of shared playing experience contemplated by the ADA, a group of frustrated parents is typically behind it all.
To understand the phenomenon, NPR visited a playground in Pocatello, Idaho.
A yellow-brick road leads to its entrance. Inside there are a pretend John Deere tractor, a make-believe general store, a clock tower and a tall rocket ship.
Seven-year-old Brooklyn Fisher plays while her dad, Jonny Fisher, watches.
"I get scared you might run me over," he tells her. "You go flying down those ramps."
Brooklyn says back: " 'Cause I let go of my wheels, that's why."
The wheels she's talking about are on her wheelchair.
This playground, a sprawling, colorful mix of whimsy and history, is named after her: Brooklyn's Playground.
It's designed so that children like Brooklyn, who have disabilities, can more easily play alongside typical children. "You create a place where kids of any ability are going to be playing together," Fisher says. "So now those kids with disabilities are going to be shoulder to shoulder with their peers, who they normally cannot be shoulder to shoulder with."
That's the same idea behind new federal requirements that require accessible playgrounds. Last year, the federal government made access to play areas a civil right under the Americans with Disabilities Act.
"Play areas are not just places where kids have fun," says Eve Hill, a civil rights lawyer with the Justice Department, which enforces the ADA. "They are places where kids learn to interact with the world, and with each other." That places playgrounds in the same category as other civil rights touchstones.
"Recreation was one of the places where the civil rights movement started, with desegregating pools and desegregating lunch counters and movie theaters. These were not unimportant," she says.

Building Brooklyn's Playground
In Pocatello — an old railroad town bordering the Fort Hall Indian Reservation — Brooklyn's Playground sits on a flat, often windy park with a view of the Rocky Mountains.
That it's here at all goes back to a minor domestic squabble and a bump on the head.
When Brooklyn was 3 years old, her dad took her to another playground, and put her in a regular swing. "I thought she could handle it," Fisher says, "So I put her in there, and my wife said, 'I wouldn't do that.' "
Brooklyn was born with spina bifida and has difficulty controlling her muscles. With no back support, she flipped out of the swing and hit her head.
"So it was at that time that my wife said, 'We need to do this. We need to bring a playground for her, for the other kids in our community, to Pocatello.' "
Inclusive designs have been evolving for decades. Federal accessibility guidelines have been around since the 1990s. But in recent years there has been a bigger push by parents, advocates and designers, amounting to an inclusive playground movement.
"We have the therapeutic swings," Fisher says. "These have got backs, so kids that don't have that muscle tone can get in there completely, and feel safe and secure and swing."
One of the elements that legally define an accessible playground is literally the ground.
"We have ramps leading up to all the play structures. You have the solid surfaces throughout the entire playground. With walkers or wheelchairs it's very easy to go around this."
If the surface weren't smooth, if it were sand or those familiar wood chips, kids in wheelchairs might get stuck, or their parents would have to carry them.
But ramps — and other inclusive playground features — drive up costs. For example, the smooth, resilient surface at Brooklyn's Playground cost more than $150,000.
Also, at 15,000 square feet, this playground is something most municipalities wouldn't have the funding to build on their own.
So the Fishers, with the help of a local civic group, started raising money.
Over eight months, the money poured in from grants and hundreds of individual donations, bake sales and garage sales. "We raised $580,000 and it cost $560,000 so we have $20,000 in the maintenance fund," Fisher says.
And when it came time to build the playground, 3,000 people showed up to work. In a week, it was done.
But public playgrounds are generally the responsibility of local governments. So, couldn't the city of Pocatello have built it?
"Absolutely not," says Mayor Brian Blad, "not on the budget we have."
He and officials from other municipalities tell NPR that a weak economy has put many local governments in survival mode — providing basic services and not much more.
"The resources just wouldn't be there for a playground like this," Blad says. "The money is needed in so many other places."
But as of March 15, 2012, federal law requires that public play areas include wheelchair-friendly surfaces and equipment that help kids with physical challenges move around. So if a town does build or renovate a playground, it must meet specific accessibility standards. And, localities must provide their residents with "program accessibility," which means there are equal play opportunities for everyone in the community.

An Inspiring Moment
Brooklyn's Playground and the kids who use it were enough to inspire a woman who stopped in Pocatello last fall during a family road trip.
"I was definitely tearful, and a bit overwhelmed," says Amanda Bakker, who visited from Salinas, Calif. "My heart was pounding out of my chest; I had chills all over. I knew that it was a pretty pivotal moment for me."
Bakker had her daughter, Tatum, with her. Tatum, who was almost 2 at the time, has spina bifida and uses a wheelchair.
Posted by DSD at 6:00 AM