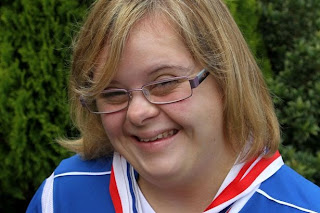 by Yonnie McInnes from The Daily Record:
BEING born with Down Syndrome hasn’t stopped 19-year-old Laura Logan from achieving sporting success.
Laura, from Coylton, Souyth Ayrshire, has already lifted around 100 swimming medals and is aiming to win more.
For on Tuesday she left for Bath along with 217 Scotland West athletes to compete in the National Special Olympic Games on Sunday.
Laura is one of eight athletes, seven swimmers, one 10-pin bowler and three coaches from Ayrshire who are part of the Sports for Special Needs’ team; Laura is part of Kilmarnock Jets Swim Team.
Sports for Special Needs coach Joan O’Sullivan said: “Laura has been a member of our club since April 2007, she trains at the Galleon Centre in Kilmarnock every Tuesday evening and has been doing additional training at Drumchapel in Glasgow with the Scotland West Swim Team on the first Sunday of every month since being selected at the end of last year.
“All athletes who wish to be selected for the team apply, then they have to go through a compatibility test to see if they fit the criteria and trials.
“On the first round there were 70 applications for 40 places on the swim team, 22 males and 18 females to be selected. So it was an honour for all successful chosen athletes to gain a position to swim for the West of Scotland at the Special Olympics.”
Laura has achieved all this despite hearing problems that have meant a lot of operations, as well as a heart defect for which she needs a yearly check-up.
Laura’s proud mum Betty, who works for Marks & Spencer in Ayr, dad Ian, who works at GE Caledonian, and older sister Lynn, 22, a carer, are thrilled at her success.
“We are all so proud of Laura as she has achieved so much”, said Betty. “Ian and I will be going down to Bath to cheer her on.”
Laura is a member of the Scottish Down Syndrome team that competes in European competitions in Southampton every April and British championships in High Wycome in July.
Laura has won an array of medals and competes in backstroke, freestyle, breaststroke and butterfly over 25m, 50m, and 100m medleys. She swam at the Aquatics Olympics in Cardiff in October 2011, winning two golds, one silver, and a bronze, and at the Ayrshire Sportsability awards she was runner-up for the Young Person of the Year Award.
Joan added: “Laura also trains at CORE Bodyshaper Gym with instructor James at Mauchline once a week, and we fit in two swimming sessions a week at Citadel, Ayr.
“And yes, we’re her very willing chauffeurs!”
This year Laura left Queen Margaret Academy and started attending Ayr College to take a year’s course, Steps to Independence.
The National Special Olympic Games normally take place every four years and runs the year following the Olympics/Paralympics. The chosen council host with the support of the Special Olympic GB office. Each athlete and coach chosen has to pay to attend and this year they have each had to raise £600.
Coach Joan O’Sullivan said: “We try to raise the money through donations, sponsorship, bingo nights, psychic nights, duck races and grant support. This year has been extremely difficult in raising the funds for the eleven going from the club due to the present financial climate. Any additional financial support would be welcomed."
Posted by DSD at 6:00 AM