5 Inspiring Latinos with Down Syndrome 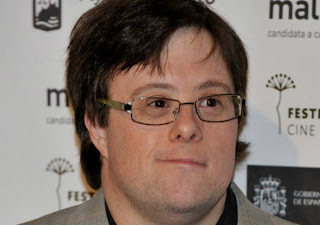 by Paloma Corredor from VOXXI.com:

As things are slowly changing, more and more people with Down syndrome are making a difference.
One of them is definitely Angela Bachiller, the first councilwoman with Down syndrome, who has just taken office at the city council in Valladolid, Spain. Bachiller, a lively 30 years-old who defines herself as friendly, positive, tenacious and stubborn, had been working in the area of social welfare and family as an administrative assistant for three years. She wants to work to give visibility and opportunities to other people with special needs.
Like Bachiller, other people with Down syndrome not only are achieving their goals, but they are showing the world that, unlike the common perception until very recently, they can do just as many things as any other person. Some of them are Latino, and these are their stories.
Many of them have been compiled by Eliana Tardio, the mother of two children with Down syndrome — Emir and Ayelen– and considered the most influential Hispanic blogger on parenting issues for children with disabilities in Spanish.
Tardio works as an advocate and family and marketing specialist for the Early Intervention Federal Program in the state of Florida and is the creator of a social network for parents of people with Down syndrome and other differences, which has 1,500 members.
Her Youtube channel is the most visited in the world for issues relating to Down syndrome. Tardio is definitely an inspiration for other parents who, like her, are dealing with the challenges of raising children with special needs.
The Spaniard Pablo Pineda, 38, is the first European citizen with Down syndrome who completed a university degree. In addition to his diploma in teaching, Pineda is an actor, and he received the award for the best performer in the 2009 San Sebastian Film Festival for his role in the film “Yo También,” where he plays the character’s alter ego, a young university graduate with Down syndrome.
Pablo gives lectures around the world with the aim of increasing awareness and respect for differences. He has just published the book “The Challenge of Learning” (“El reto de aprender”), which recounts his own experience in the education.
Maria Jose Araujo is a 15 year-old girl who was chosen to carry the presidential sash in the official appointment of Ecuadorian President, Rafael Correa. She’s a member of the National System of Music for Children with Special Needs, and the first person with Down syndrome that has been chosen to deliver this honor, which represented the willingness of a nation to support a more inclusive world.
Last year, Ayelen Barreiro, 21, became a dancer on the Argentinian show “Showmatch,” one of the most popular dance shows in South America, hosted by Latino celebrity Marcelo Tinelli. Not only did Ayelen captivate the audience with her talent and passion for dance, her boyfriend Facu, who also has Down syndrome, became a star thanks to his ease in front of the camera and charming sense of humor.
At less than one year of age, Valentina Guerrero became one of the youngest and most popular world-wide fashion models of 2012, posing as the irresistibly adorable star for the Spanish brand Dolores Cortes. Her cute little face went viral in just a couple of days, and at such a tender young age, she was not only featured on the cover of People Magazine, but also modeled on Miami Fashion Week’s catwalk.
There was a time when having Down syndrome was synonymous for a limited life. Now, these five Latino people are showing the world that they, and those with the same condition, can live their lives to the fullest. They are inspirational examples for all of us.