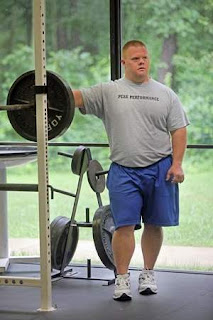 by Kelly Bothum from The News Journal:
Sitting at the kitchen table in his family’s Newark home, Jon Stoklosa comes across as a laid-back, almost shy guy. He answers questions with a word, preferring instead to look out the backyard window and let his parents, Hank and Liz, do the talking.
But the medal he clasps in his right hand offers a glimmer of the personality that hides beneath his sturdy 5-foot-5 frame.

It’s from a recent powerlifting competition in upstate New York, one where he bench-pressed a personal best of 402.5 pounds and came in third in his age division. He also picked up the “Most Inspirational” award, a unanimous choice by other competitors, many of whom gathered to watch the 31-year-old make his lifts.
Friends and family say Jon, who was born with Down syndrome, is an example of what is possible when people aren’t tethered by labels.
In addition to being able to bench-press more than 400 pounds, Jon can squat 440 pounds and dead-lift an identical amount. He has excelled at the sport, winning a gold medal in the Special Olympics World Games in 1999.
In recent years, Jon has branched out beyond Special Olympics, which is open to athletes with intellectual disabilities. He now competes at least twice a year in powerlifting competitions in Pennsylvania and New York against athletes who aren’t disabled.His presence at these competitions has become a welcome sight for other lifters who respect his dedication and enthusiasm for the sport, said Dennis Brochey, the New York state chairman of the United States Powerlifting Association.
“You can’t help but love him. When he competed last year, everybody showed up to watch him. They’re in awe of his gifts,” said Brochey, who organized the recent powerlifting event Jon competed in, held at Mickey Rats in Angola, N.Y. “Once he gets up there, nobody notices any handicap he has. He’s a competitor. He’s just like everybody out there.”
If Jon seems quiet with a visitor to his home, the gym is where his extrovert personality explodes.
He’s been known to sport a colorful mohawk on the day of a competition. He loves to pound his chest after a successful lift. He yells. He flexes his muscles. Except for when he’s lifting – and his face wears a look of concentration – he’s nothing but smiles.
“He loves to entertain,” said his mother, Liz.
For all his enthusiasm, Jon is good at what he does. He began lifting in the basement with his brothers when he was 12 years old. When he was 13, he could bench 185 pounds. By 16, he was benching 225 pounds.
Technique is important for anyone lifting weight. But for Jon, who has cognitive disabilities, it’s critical, said Hank Stoklosa, who often assists his son with his workouts.
“The amount of effort is different. It’s a lot more effort for Jon,” he said. “There’s so much focus on technique.”
Gains in how much weight Jon can lift are made slowly, increasing by about 5 pounds a year. There’s also heightened attention on injury prevention, especially since Jon ruptured his anterior cruciate ligament, or ACL, in 2007. He didn’t do squats for nine months after that.
Jon works out three times a week with personal trainer Brandon McGovern. He also practices with other powerlifters who have developmental disabilities. One of his teammates, David Hill, also competes in non-Special Olympics powerlifting events.
When asked why he likes lifting such heavy weights, Jon gets right to the point. “It’s fun,” he says, a slight smile creeping across his face.
In Delaware, about 20 percent of the population has some kind of disability, according to state data. This includes people with cognitive and physical disabilities, those who have lost a limb and people with sensory impairments.
While there’s no evidence people with disabilities are at greater risk of health problems, they can develop so-called secondary conditions like diabetes, high cholesterol or depression. People with Down syndrome also are more likely to have heart conditions, thyroid disorders and certain infections.
Even without secondary conditions, people with disabilities are less likely to be physically active than the rest of the population.
The chance for sustained physical activity is one of the benefits of participation with Special Olympics, said Jon Buzby, director of media relations for Special Olympics Delaware. Athletes are grouped according to ability, giving each the chance to be competitive.
“We truly believe that as wonderful as Special Olympics is in providing competitive opportunities, just as importantly it gets them active,” Buzby said.
While the vast majority of Special Olympics athletes don’t compete outside the organized games, Buzby said, there are a few long-distance runners who have competed in local 5ks, 10ks and half-marathons.
Jon loves the chance to compete each year with the Special Olympics, but the family realized long ago that to help him reach his competitive potential they would have to go elsewhere.
Liz and Hank Stoklosa admit the first competition at Mickey Rat’s two years ago was nerve-wracking. Jon was one of 63 lifters competing in the event.
“When we walked in, these guys, big guys, all looked at him, like ‘Who is this kid?’ ” Hank recalled.
Then they saw him put up 340 pounds on the bench press. Suddenly, the stares disappeared.
“He gained their respect really quickly,” Liz said.
Since then, Jon has had some of his biggest successes in open competition. He bench-pressed his personal best of 402.5 pounds last month at Mickey Rat’s, and last November he completed a 440-pound squat at a gym in Glenolden, Pa.
This year, when Jon bench-pressed 365 pounds on his opening lift – a weight higher than 65 other competitors – the crowd at Mickey Rat’s went wild, Brochey said.
“He placed third in his division, which means he’s placing third against New York state’s best,” he added. “That puts him up there with the elite.”
Hank Stoklosa said he often hears from parents of children with disabilities who are surprised by Jon’s success. His answer: time, dedication and effort, something Hank and Liz have always showered on their three adults sons.
Hank pauses, then adds: “We never expected anything less from him than his brothers.”
Posted by DSD at 10:19 AM