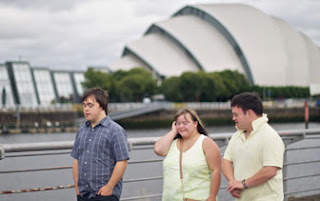 from CMW.net:
Glasgow has been chosen to host the World Down Syndrome Congress in 2018. The event is expected to boost the city’s economy by up to £1.6m. It will be the first time the Congress will have taken place in Scotland.
Down’s Syndrome Scotland submitted its bid for the Congress in partnership with Glasgow City Marketing Bureau (GCMB), the Scottish Council for Voluntary Organisations (SCVO), VisitScotland and the Scottish Exhibition and Conference Centre (SECC) in August.
The city will welcome 1,200 delegates to the four-day conference, which will run 1-4 August, 2018 at the SECC.
Glasgow’s bid beat off strong competition from cities in four other countries.
Held every three years, the Congress brings together people with Down’s syndrome, their parents and carers, professionals, practitioners, researchers and organisations. It is expected  to generate around 6,000 hotel room nights in Glasgow.
Andrew Boys, Director of Down Syndrome International (DSi), said: “Following lengthy scrutiny and discussion, DSi is delighted to announce that Down’s Syndrome Scotland has been successful and we look forward to working with them to hold a Congress which will help to fulfil our mission to improve quality of life for people with Down’s syndrome worldwide and promote their inherent right to be accepted and included as valued and equal members of their communities.”
Glasgow’s bid was the first to use the city’s new ‘People Make Glasgow’ brand, which launched in June. It was led by Andrew Macintyre (26), Stuart Campbell (27) and Sam Ross (25), each of whom has Down’s syndrome and are members of Down’s Syndrome Scotland.
Sam, from Glasgow, said: “I’m looking forward to meeting other people with Down’s Syndrome from other cultures. I want to hear different languages because I’m learning French. Visitors will love Glasgow as the people here are very friendly and kind.”
Councillor Gordon Matheson, Leader of Glasgow City Council and Chair of Glasgow City Marketing Bureau, said: “I am delighted that Down Syndrome International has chosen to host its global Congress in Glasgow when it marks its first visit to Scotland in 2018 – the city is looking forward to warmly welcoming delegates from all over the world for this prestigious meeting.
“It’s also hugely positive news that our first major conference bid reflecting the city’s new brand has been successful, demonstrating that People Make Glasgow  is a real point of difference, and congratulations to Andrew, Stuart and Sam for leading the city’s bid.”
Pandora Summerfield, Chief Executive of Down’s Syndrome Scotland, said: “We look forward to providing a broad spectrum of informative sessions showcasing the latest discoveries in research and best practice as well as fringe events for the general public and Scottish cultural experiences for families that they won’t forget.”
The World Down’s Syndrome Congress 2012 was held in Cape Town, South Africa and WDSC 2015 will take place in Chennai, India 18-21 August, hosted by the Down’s Syndrome Federation of India.
Posted by DSD at 6:00 AM