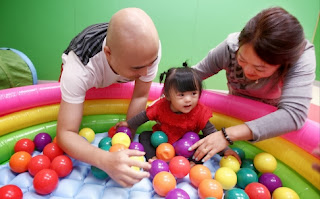 by Lo Wei from the South China Morning Post:
Little Venus Cheng may not know it, but her parents have faced many challenges since her birth. Venus, now nearly 18 months old, was born with Down's syndrome. She crawls around, plays with toys and gurgles like other young children, but her development is delayed and she needs special help.
"We didn't know much about the condition at first," said mother Rebecca Woo, who found out after the birth that Venus had the syndrome, which affects about one in 600 babies. "We were worried and upset at first. But now it's different - some time has passed and we see that she's healthy."
The family has been receiving assistance from the Down Syndrome Association since Venus was about three months old. In early sessions, Woo and her husband Friend Cheng learned how to massage Venus to strengthen her muscles. She has poor muscle tone, which causes weak motor skills.
As she grew older, she attended sessions at the association's centre to learn various skills. Things that seem simple, like picking up a toy, take a lot of practice for Venus.
Katie Lok Pui-ying, in charge of services for the association, said early intervention was vital for children born with Down's syndrome. The "golden period" for training to help them improve was while they were still babies.
But the wait for early training and special education provided by the Social Welfare Department is usually about two years. The association's services filled the gap, Lok said.
Operation Santa Claus, a charity drive jointly organised by the South China Morning Post and RTHK, will be raising funds for the association to provide counselling, individual and group training sessions for Down's syndrome children and their parents. This will benefit 70 families over the next two years.
The government does not fund these services. With donations, the association will offer the sessions at a minimal price, charged mainly to encourage parents' commitment, Lok said.
Cheng said it was encouraging to see Venus improve after each session - from learning to turn her body, to the stage now, where she can almost stand up.
Woo said: "If she grows up to be among the more able children, I hope she can work to serve others with Down's syndrome."
Posted by DSD at 6:00 AM