from Wetpaint.com by Ryan Gajewski:
Sometimes, we think that our society is making significant strides to not encourage offensive terms — and at other times, we're not so sure. So we're proud of one Glee star for calling out a major company for its needlessly offensive product name.
Glee star Lauren Potter (Becky), who has Down syndrome, took to Twitter this week to call out Sephora cosmetics company for releasing a shade of lipstick which is inexplicably called "Celebutard." Yeah, we don't know what the company was thinking either. The shade is described on the company's site as "nude peach beige."
The lipstick shade is part of Kat Von D's lipstick line called Painted Love. Several of the lipsticks in the line are named for colors that are definitely intended to be incendiary, including "Underage Red," "Lolita," and "Backstage Bambi."
On November 5, Lauren tweeted:

Lauren has been an outspoken critic of the word "retard," which "Celebutard" is clearly referencing. Lauren is also a spokesperson for AbilityPath.org's "Disable Bullying" campaign. So it makes sense that she would voice her issue with this color name.
We agree with Lauren that the color title makes it seem okay to make fun of people who have developmental disabilities. And it's not like the word "Celebutard" even has anything to do with the product or color. So we hope Sephora realizes the error and changes the name. 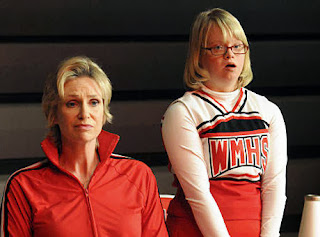 Sign the change.org petition to remove this products name.﻿