Take an unexpected journey with Up Down Boy 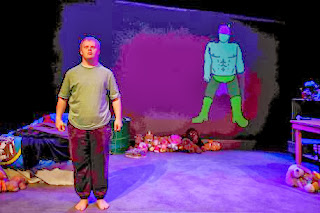 by Jill Harding from the Salisbury Journal:
DESPITE the visions of a seaside clairvoyant, mother-of-six and former school bus driver Sue Shields never dreamed she would become a writer, let alone one whose work is being performed on a London stage.
But Shields’ emotive play Up Down Boy, which tells the story of raising her son Nathan Bessell, who has Down’s syndrome, was so successful after it premiered at Salisbury Playhouse last year that went to the National Theatre, and is now coming back to Salisbury as part of a second nationwide tour.
Up Down Boy emerged from a series of text messages that Shields sent to Heather Williams, who ran the youth drama group Nathan attended.
Her messages, which gave an insight into the trials and joys of bringing up a child with Down’s syndrome, sparked an idea in Williams’ head.
“Sue was witty and quick – the messages might have been about when she was picking Nathan up but they always gave a glimpse of what her life was like and I thought that could work well as a play,” said Williams.
“It had to be something Sue wrote herself as it was her story. But I knew it would appeal to a wider audience and not only people who have a learning disabled child.”
Shields was supported by Mamma Mia! author Catherine Johnson who gave her a laptop and helped her put her ideas down in black and white.
The play was co-produced by Williams’ Bristol-based Myrtle Theatre Company and Salisbury Playhouse.
The reaction to the play was so positive that it toured all over the country and also went to New Zealand.
“I’ll never forget Sue saying that when Nathan was born with Down’s syndrome she didn’t know where their lives were going anymore, but now he’s taken her to the other side of the world and back,” said Williams, who plays the role of Bessell’s mother in Up Down Boy.
“It is an honour to work with their family.
Nathan is such a talented actor. Back in youth theatre you could always see his potential and now he has been able to develop it and show his incredible abilities on stage.”
With the help of projections, Up Down Boy tells the story of Bessell’s childhood and his relationship with his family before he leaves home for college to follow his own path.
Bessell plays himself and is able to use his talents in physical theatre and dance to bring his family’s own bittersweet tale to the stage.
“He is in his element,” said Shields. “He absolutely loves it.”
“I didn’t know what the reaction would be – there are funny bits, but it is a moving story.
I feel bad when I see people crying in the sad places but afterwards they always tell me how much they enjoyed it.
“When I see it I’m watching as a mother – a proud parent whose child is on stage doing what he loves.”
Years before Bessell was born, Shields visited a clairvoyant called Madame Zena in South Shields who told her that one day she would write a book.
“I thought it was such a lot of rubbish but I said if I ever did write it I would use the pen name Zena Shields,” she said.
“The theatre company didn’t like the Zena bit, but Shields has stuck.”
But with six children to raise – Nathan is the second youngest – and a job driving school transport, writing was soon far from Shields’ mind. “It was Christmas when they asked me to write the play but I was convinced it was April 1 and they were joking,”
she said. “I had to pinch myself. I’ve never done anything like this and never thought I would.
“This play has taken us on a wonderful adventure, and if our story entertains and inspires people then I’m very pleased about that.”
Posted by DSD at 6:00 AM

Email ThisBlogThis!Share to TwitterShare to FacebookShare to Pinterest
Labels: Down syndrome, Nathan Bessell, play, Sue Sheilds, Up Down Boy