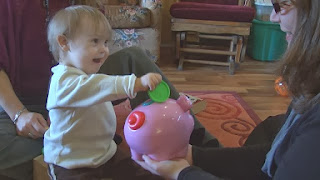 by Melissa Constanzer from WJFW NBC 12:

Gleason - We all want perfect, healthy, and happy babies but sometimes things don't go as perfectly as planned. One Gleason woman and her family learned how to accept this.

"The second I looked at the picture, I knew he had Down Syndrome," said Shannon Staskiewicz.

Shannon Staskiewicz couldn't lose that thought when she first saw her new baby boy. "I was depressed, I was angry, I was grieving, you know, I expected to have this perfect little boy. And while he is perfect in his own way, it took a long time to make that connection. When I looked at him, all I saw was Down Syndrome, I didn't see Hunter," says Shannon.

She couldn't prepare for this. So she turned to other mothers online for help.

But the family couldn't afford for the anger to last long. Hunter needed lots of care and attention.

"About twenty-five to forty percent of all Down Syndrome babies have some form of cardiac malformation," said Dr. Dennis McFadden, Shannon's OB/GYN.

Hunter had a hole in his heart that healed on its own. But he was born with breathing issues. His lungs aren't as strong as they should be.

"With Hunter, putting him in daycare doesn't work well. He doesn't have a very good immune system...Three days, he would be home sick," says Staskiewicz.

Shannon had to quit her job to take care of Hunter. It put extra stress on her family but she believes it was worth it. The only difference from her other children is that Hunter grows and learns at a slower rate.

"So it's just that longer extended timeline. Otherwise he's stubborn, he's sweet, he is, you know, can get into things that he's not supposed to. We're just getting ready to install a baby gate because now with him being more mobile, he's into everything," stated Shannon.

"We're not going to let the fact that he has Down Syndrome hold him down, or let anything get in his way because he can do everything anybody else can do," says Shannon.

Shannon has the same dreams and goals for Hunter as her other two children. But the road will undoubtedly be longer and tougher.

"I think it's very important to, have as much warning as you can from the patient standpoint. This can be a very shocking experience that can really be emotionally challenging at the time of birth," says Dr. McFadden.

"It's okay to, you know, be angry and he is worth it. He is absolutely, 100 percent worth every second," said Shannon.

If you want to learn more about Shannon's story, check out the Hello, Hunter Facebook page.
Posted by DSD at 6:00 AM