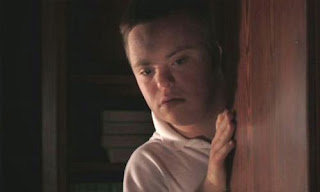 by Jenn Smith from the Berkshire Eagle: NORTH ADAMS -- He's not Santa Claus, but a young man named Peter Johnson brought a whole lot of hope and holiday cheer to a movie theater full of fans over the weekend. Johnson, now 26, of Scituate and West Stockbridge, has a leading role in a 2007 holiday family film called "The Child King." The film was part of a special presentation organized by United Cerebral Palsy of Berkshire County and the North Adams Movieplex, which donated the use of the theater and some popcorn for the nearly 70 people who attended the screening. "The Child King" chronicles the story of an older brother, Jeremy West (Johnson), who is determined to prove the existence of Santa Claus to his younger brother Jarrett (Will Kellem), resulting in a memorable road trip full of adventure, personal discovery and a little holiday magic. What makes this film -- produced by Massachusetts-based brothers Jeff and Frank Kerr -- unique, is that it's one of the few feature-length films out there to feature an actor and leading character with Down syndrome.
Down syndrome is a genetic condition through which a baby inherits an extra chromosome. The extra genetic material can cause both physical and mental developmental delays in a person, varying their levels of ability. Approximately one in every 691 babies in the United States is born with Down syndrome, according to the National Down Syndrome Society. "My focus for this film and for being here today is just strictly for the special needs community and to spread awareness," Johnson told The Eagle after the screening. Johnson was nearly 17 at the time when the Kerrs began making the film -- a whole other story in itself (thechildking.com/about.html). "When I first met Peter, I had my doubts," director Frank Kerr told The Boston Globe in a 2007 article about the film. "A lead actor with Down syndrome? Could he carry off his lines? Hit his marks? Wait for cues? Interact with other actors? Those aren't the easiest things to do and still be comfortable in front of a camera. But Peter loosened up as we went along and did a wonderful job." Johnson told The Eagle that "the thing about people with special needs is not about the abilities they don't have but about the dedication they do have and people's feelings inside." He said both in the film and in real life, some people look at people with Down syndrome and think or call a person with Down syndrome "stupid." "I don't like the word and I think it's unacceptable to say to a special needs person," Johnson said. In the film, his character Jeremy also successfully stands up to bullies who judge his intelligence. He says at times, Peter Johnson said he feels "trapped in my skin" but continues to set and work hard to achieve life goals. Johnson gives his parents, Jane and Charlie Johnson a lot of credit for their support -- "They've been with me for so long even when I wake up at night going through all the things that I feel." The Johnson family also gives credit to a lot of support from community-based programs, like Friendship Home Inc. in Norwell, where Peter goes to a day program to learn and practice job and life skills. Peter has been working out at and working for the health and well-being center and his local YMCA since 2002. He also works as a host at an Irish pub in Norwell called The Tinker's Son. "Job coaching and having an intermediary between an employer and family is helpful," Charlie Johnson said. After Saturday's film screening, Peter went to the UCP offices in North Adams for a reception luncheon, where he was greeted with applause and hugs from fans, like Louisa Millonzi of Riverbrook in Stockbridge. Erin Cote, assistant director of individual and family support services for UCP-Berkshire, said this was the first inclusive film screening event of its kind the organization has hosted. "I think a lot of the guys here especially are excited to see a guy with disabilities playing a guy with disabilities in a movie. They don't get to see someone like that often," she said. Peter Johnson said his advice to other people with special needs working toward life goals is to "do what your heart wants to do and go with your stomach. There are more possibilities out there. The more people talk to [people with special needs] the more they will see this." To reach Jenn Smith:
jsmith@berkshireeagle.com,
or (413) 496-6239.
On Twitter: @JennSmith_Ink More information To learn more about UCP of the Berkshires, visit ucpberkshire.org or call (413) 442-1562. To learn more about "The Child King" film and The Child King Foundation, the Massachusetts nonprofit that gives grants to organizations supporting people with disabilities, visit thechildking.com.
Posted by DSD at 6:00 AM