Man With Down Syndrome Celebrates 25 Years on Job 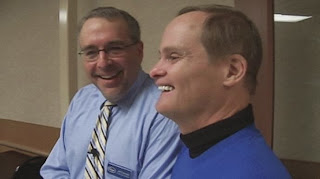 A Dalton man was honored Thursday for 25-years of service on his job.

The 44-year-old has Down syndrome and had no idea he would be surprised for this milestone.

We were there as friends, family, and co-workers honored Andy Jackson.

Andy is the head bagger at the Dalton Kroger on Cleveland Highway. People who know and work with Andy tell us he's truly an angel to his customers and everyone he encounters.

"He's very friendly with our customers, and if he can make it 25-years in this kind of business is amazing to all of us," says Andy's co-worker Tonya Moses.

"It makes him feel good when people appreciate him, and I think most of the people have done so," says Edmond Jackson, Andy's father.

We asked Andy what's been the highlight of his 25-years. He said, "Bagging and talking with customers."

Andy Jackson tells us he has no plans to retire and wants to work at his  Kroger store for at least 30-more years.
Posted by DSD at 6:00 AM