Brooklyn nonprofit charged with negligence in alleged attack on man with Down syndrome: Lawsuit 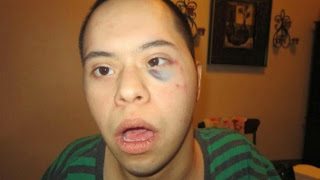 by Thomas Tracy from the New York Daily News:
A nonprofit affiliate of the Brooklyn Diocese failed to protect a 24-year-old developmentally disabled man allegedly attacked under its care — then told outraged family members that he received his injuries by “walking into a door frame,” a bombshell lawsuit claims.
A lawyer for Jorge Cabello said HeartShare Human Services cleaned the man’s clothes after he was apparently pummeled and suffered a smattering of injuries on Sept. 7, 2012, but couldn’t tell family members how he had sustained a black eye and a facial fracture.
When Cabello — who has Down syndrome and has the mental acuity of a 6-year-old — returned home from the HeartShare program on MacDonough St. that Friday “he was crying hysterically, he had a black eye and red markings on the right side of his face,” the lawsuit states. 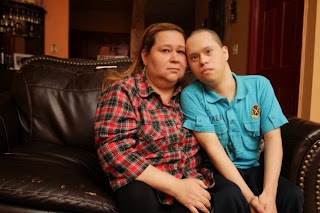 He also, according to the suit, “had bruises on both knees” and other injuries “signaling that he was punched, kicked, his hands were held behind his back and he was beaten.”
“His personal clothing were washed and returned wet in a bag, with no explanation as to how he was injured or why his clothing needed to be changed,” the lawsuit states.

When Jorge’s mother, Lorena Cepeda, demanded an answer, one HeartShare worker speculated that Jorge may have walked into a door frame, family members said.
“When we first asked them they denied everything . . . they said they didn’t know,” Jorge’s younger brother Galo, 20, told the Daily News. “We asked if they had cameras, and they said they didn’t have cameras. That’s when they told us that he hit the door frame with his face.”
“(Jorge) has a very difficult time expressing his feelings,” explained Cabello’s attorney, Robinson Iglesias. “He isn’t saying what occurred, but he did say that someone hit him. (HeartShare) is not saying they did anything wrong, but you would expect them to call the family, at a minimum, or provide medical care.”

“(After all this) I was surprised to learn that they were owned by the Catholic Church,” he said. “We’re just trying to get some answers.”
As an added insult, HeartShare told Cepeda that, after an investigation, Jorge was no longer welcome at the program.
“Cabello family will not send their son Jorge Cabello to program,” a HeartShare program coordinator wrote in a terse note.
Jorge has been at home ever since, Iglesias said.

“There should be a reason why the Cabello family cannot send their son back to the program,” Iglesias said. “Did he do anything wrong? What led to him being excluded?”
Iglesias plans to go to court next month and compel HeartShare to reveal what happened to the 24-year-old.
HeartShare — which reported gross receipts of $92 million in its 2011 tax filings — receives funding from the state Office for People with Developmental Disabilities as well as the New York State Education Department and the New York City Department of Education.
The flush nonprofit is run by William Guarinello, who is also the longtime chairman of Community Board 11 in Bath Beach and earned about $530,000 in total compensation in 2011, according to HeartShare tax documents.
The organization doesn’t mention its church affiliation on its website or in tax documents, but the Roman Catholic Diocese of Brooklyn is named as a co-defendant in the suit.
The agency would not comment on the lawsuit or explain why Cabello was thrown out of the program, but said it did launch an investigation into his injuries.
“In the incident involving this individual, multiple levels of investigations did not find that any abuse occurred,” a HeartShare spokeswoman said in a statement.
ttracy@nydailynews.com


Read more: http://www.nydailynews.com/new-york/brooklyn/heartshare-charged-heartless-care-article-1.1505012#ixzz2jh1PSn8G
Posted by DSD at 6:00 AM