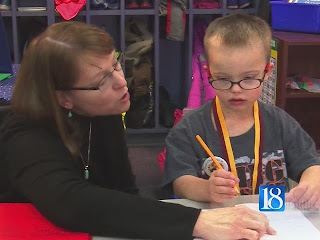 by Amber Hardwick from WLFI 18:
FRANKFORT, Ind. (WLFI) - A six-year-old boy with Down syndrome is the newest hero in Frankfort for saving a student from choking.
Mason Hedges is a first grade student with Down syndrome at Suncrest Elementary School. On Wednesday, Mason became a young hero in the community.
Suncrest Elementary School Principal, Suzy Kontos, said it happened at lunch when Mason saw another student choking.
"In first grade lunch, Mason was sitting across the table from his friend. Evidently, he noticed that the little boy across from him was not breathing and was turning red," said Kontos.
Kontos said Mason was walking to his Para Professional, JD Kinslow, when the custodian spotted him. She said the custodian knew Mason was trying to get help. The custodian was able to help the choking student.
Mason's teacher, Beth Lamar, said she was proud of Mason when she heard the story.
“I really wasn't surprised because he's a very caring child and he's a part of our community of our classroom," said Lamar.
On Thursday, Mason was awarded a pin and a medal for alerting an adult in a potentially dangerous situation. His actions helped save his friend's life.
Mason's parents said they were touched when they found out what Mason had done.
"I was happy. I was really proud of him, " said Mason's father, Matt Hedges.
"Happy. Proud. Joy, " said Mason's mother, Amanda Hedges.
Mason will forever be a hero to Suncrest Elementary School and the Frankfort Community.
"This just solidifies everything we believe about him. That he is a wonderful kid and a great friend to his classmates," said Kontos.
Posted by DSD at 6:00 AM