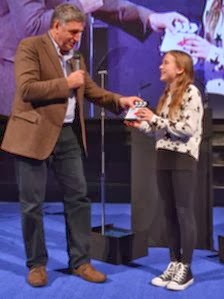 from BBC News:
An 11-year-old girl who finished top in Wales in a world spelling championship has now scooped a national film award.
Agnieszka Kolaczynska won the "ones to watch" category at the National Youth Film Festival for
documentaries about her sister who has Down's Syndrome.
Agnieszka, from Llidiartywaen near Llanidloes, has been making films and music videos since the age of eight.
She was presented with her award by Downton Abbey actor Jim Carter at a ceremony in Leicester Square in London.
The National Youth Film Festival celebrates young filmmakers across the UK.

A festival spokesman said Agnieszka's short documentaries called My Little Sister - Who Happens To Have Down's Syndrome had reached unexpected audiences around the world, with the first episode alone receiving more than 200,000 internet hits.
The films are about Agnieszka's little sister Magdalena and they show the pair dancing, singing and playing.
Agnieszka, who won in the 11 to 15 age category, said she loved how film could make people question and think and "take you into another world".
"For me, a self-taught film maker, home educated in the remote Welsh hills, this award has come as a bolt out of the blue," she added.
"It was incredible to see my film on a screen in Leicester Square and I intend for many more of my films to hit the big screen too.
"I love the magic of creating films that move people and make a film a day. It's awesome that the My Little Sister - Who Happens To Have Down's Syndrome series that I started when I was eight, will be seen by more people too."
The festival said Agnieszka spent time researching filmmakers, their films and developing her own techniques.
'Alarmingly good'
One of the festival's judges Jim Carter, who plays butler Carson in the ITV drama Downton Abbey, said it was brilliant to see children so passionate and confident about film.
"I presented the ones to watch award, a boy and two girls who have made their own films, produced, directed, and written them," he added.
"They are quite alarmingly good, so I was thrilled to be asked to do it and I wish them all the best in the future."
Agnieszka, who has Polish roots, was first in Wales, seventh in the UK and 31st worldwide at the World Education Games spelling championships last year, finishing ahead of 1.5 million other children.
Children from 200 countries took part in the event against the clock and Agnieszka, who is educated at home, had not sat a spelling test before.
"If you can spell my name, you can spell just about anything," said Agnieszka after winning the prize.
Posted by DSD at 6:00 AM