graduate with Down syndrome ready for future 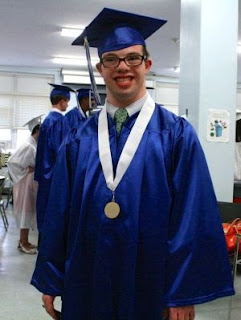 by Phil Gerber from the Observer-Tribune:
Overcoming challenges is nothing new for Timothy Taverna and the 20-year-old Long Valley youth is now on the cusp of one of his biggest challenges.
Taverna, who has Down syndrome,  graduated on Thursday, June 13, from  ECLC, a private, non-profit school formed in 1970 in Chatham for children 5 to 21 with special needs including severe learning or language disabilities, autism spectrum or multiple disabilities.
“It’s been very positive for Tim and for us,” said his mother, Laura. “He cried at graduation. He was bawling his eyes out and it made all of us cry too.”
The graduates all had the chance to address their peers at graduation. The young Taverna spoke about his goal of one day being married and living in Long Valley.
Mrs. Taverna said her son made friends and that his potential was realized and appreciated during his years at ECLC. It wasn’t always that way.
In 2001, the youth was a fourth grader at the Old Farmers School and was preparing to attend the middle school. His years in elementary school were often difficult as there were no other children with whom he could relate.
He enrolled at ECLC in Chatham in 2001, one of 212 children ranging from 5 to 21-years-old and grouped by abilities. And he never looked back as he’s had opportunities that were formerly not possible. He ran for the ECLC student council two years ago, but though he lost, it was an important experience, his mother said.
And he has learned critical life skills like how to buy train tickets and take the train to Summit or to New York City. And there have been weekly experiences that typical children might take for granted, like bowling or going for lunch at Burger King.
Academically, Taverna also has shown that he has great potential.
“I’m amazed that he comes up with facts and he’s right on,” his mother said.
For much of the past two years, Taverna has focused on learning employment skills and the transition from student to adult. Companies came to ECLC to educate students about skills they would need.
“ECLC does an excellent job in transitioning students and families,” said the school’s principal, Diane Gagliardi.
Gagliardi said one stark change after the child turns 21 is that agencies will no longer call with services; it will be up to the parents to be proactive.
She said the goal for all of the ECLC students is to gain supported employment.
Since February, Taverna has been learning employment skills through Employment Horizon in Cedar Knolls. For two days each week, he has learned various tasks, including filling boxes with items from Tiffany’s; creating goodie bags for an area dentist; and cleaning and putting batteries in remote control devices.
Taverna will turn 21 on Saturday, June 29. Various forms of aid end when people “age out” at 21 and that means no more funds for transportation to programs or for various kinds of therapy.
While there are some job training programs, the cost of transportation is often the biggest obstacle for the young people.
“It’s a crime when a person can be working but he can’t get to the job because the family can’t afford transportation,” said Gagliardi.
It also means that the school will no longer be a factor and parents must take a more active role in linking their son with social and employment programs.
Now that he’s is done with school, Taverna will begin a five-day a week, full-time program at Employment Horizons. The Tavernas have hired a transportation company to bring their son back and forth to the work program.
“It’s expensive but it‘s what we are willing to do,” said Mrs. Taverna, the chief financial officer at Daytop, a teen substance abuse treatment center in Mendham.
Her husband, John, works in the financial field.
Maintaining social contacts that Taverna will no longer have through the school is critical. Taverna also will continue with karate lessons three days a week and piano lessons once weekly. His parents also hope to tap into the Morris Arc and ECLC alumni groups.
Taverna also has a girlfriend and Gagliardi said marriage down the road is not out of the question.
“Why shouldn’t they have the same dreams as everybody else?” said Gagliardi. “I could see Tim at some stage in life getting married. I could see him working and having a social life.”
The challenges are real and Mrs. Taverna said she tries to keep a positive outlook.
“It’s kind of exciting but I’m apprehensive too,” Mrs. Taverna said.
For now, Taverna will live at home with his parents and brother, Matthew, 23. But Mrs. Taverna said the future is unsettled because of the waiting list of 12 years for state-funded supervised housing.
“I am concerned he will want to move out and there will be no place to go,” Mrs. Taverna said.
Posted by DSD at 11:06 AM