The Unfinished Child, a Story of Down Syndrome, Love, and Choice (and a Book Giveaway) 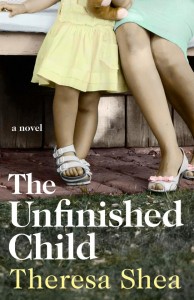 by Amy Julia Becker of Thin Places-Faith, Family, & Disability from Patheos.com:
Over the past month, I have had the privilege of corresponding with Theresa Shea, author of The Unfinished Child, a novel about two families whose lives are affected by Down syndrome. In one narrative, set in the mid 1940s, Margaret gives birth to Carolyn, and her doctor convinces her to send Carolyn to an institution immediately. In the other, set in the early 2000′s, Marie finds out that at age 39 she is unexpectedly pregnant (with a husband and two tween daughters), and that her baby has Down syndrome.
I am fairly confident that I would have loved this book even if I didn’t have a child of my own with Down syndrome, because it’s not really about Down syndrome. It’s about family and suffering and compassion and culture and love and why we make the choices we make.
Thankfully, Theresa Shea agreed to an interview with me, which I will print here today and tomorrow. Meanwhile, I hope you will purchase or download your own copy of The Unfinished Child today.
How did you come up with the title The Unfinished Child?
Originally, I had another working title for the book, but one day I came across an article in a medical journal that explained doctors used to call babies born with Down syndrome “unfinished children” because it was believed that their bodies hadn’t fully developed in the womb. Right away I thought — there’s my title.
For me, the title resonates on so many levels. The unfinished child can refer to the baby with Down syndrome or the baby that is terminated. On a more abstract level, it refers to everybody, for I often wonder if any of us are every really “finished.” Aren’t we all a work in progress?
Your book traces two stories that both have to do with Down syndrome. In one, a mother agrees that her daughter should go to an institution at birth. In another, a woman with a prenatal diagnosis of Down syndrome wrestles with whether to terminate the pregnancy. What parallels do you see between the two women? By having part of the narrative set in the 1940s, I was able to show how automatic institutionalization was the “norm” for babies born with Down syndrome. In 1947, Margaret feels the maternal pull to love her baby, but the cultural forces of the day are simply too strong for her to withstand. I wanted to show that none of these people were “bad.” The doctor honestly believed that an institution was the right place for a baby with Down syndrome. By contrast, in 2002, Marie has the opportunity to find out, through prenatal testing, the “health” of her baby. So in effect, the two narratives illustrate that there’s now a “science” behind the detection of Down syndrome that didn’t exist in Margaret’s day. The two narratives, then, juxtapose the “take what you get” with the “do we want this baby?”
Really, what I wanted to question in the two narratives is whether or not we have “advanced” in our feelings about people who are not “typically-developing.” In 2011, Denmark boasted that it would be “Down Syndrome Free” by 2030. By contrast, in March of 2013, North Dakota banned abortion based on the result of prenatal testing. These diametrically opposing views exist within the same cultural time frame; clearly, we are not united in our views on whether or not to bring people with Down syndrome into the world. On a certain level, the very fact that a test exists to pinpoint the existence of Down syndrome suggests that this condition has been identified as being “wrong.” In other words, the rhetoric is tipped in a certain direction that makes it difficult for people to think outside of that diagnosis.
How different, then, is the automatic institutionalization of babies with Down syndrome in the 1940s from contemporary prenatal testing that enables diagnosis to happen in utero?
What kind of research did you do as a part of your writing process?
My research was scattered and haphazard, largely due to the fact that I wrote the book over a 12 year period with lots of starts and stops and drafts and edits. I would dive into it for a bit and then put it away for a longer bit. I do not recommend this! However, I used a combination of my own personal experience (I had a third child while writing the book), the stories that people shared with me, newspaper articles, and medical journals to gather information. What clinched things for me was stumbling upon an article in a medical journal from 1960 about a “mongoloid woman” who’d given birth to a “normal” child. I had assumed that people with Down syndrome were infertile. The idea of a “normal” child being born to a mother with Down syndrome caught my attention. I couldn’t stop thinking about the various scenarios that could result from this birth. Elizabeth had been in the novel from the beginning, but Carolyn was a late addition. In my mind, the story line of Margaret, Carolyn, and Elizabeth is very strong.
Posted by DSD at 6:00 AM