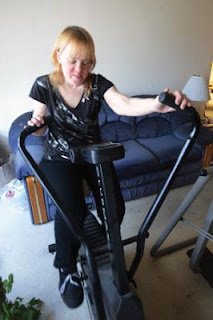 by Irma Widjojo from the Times-Herald:
Gone are the days of super burritos, pepperoni pizzas and cheese nachos.
Angelique Nabours went from 324 pounds to just a little more than 130 within a few years. The 39-year-old woman was born with Down Syndrome and had a lifelong weight problem -- until a few years ago when she had a seizure. "That really scared me," her mother Anne Nabours said. "We are still not sure what caused the seizure, but her weight had a lot to do with it." Angelique then moved into a major lifestyle change, including starting a diet and exercise regimen. In a little less than two years, she has lost nearly 200 pounds. "I work out every day," she said. "I feel fine, and I have more energy." The Vallejo woman works out either at the gym, or at home on her cardio machines while watching her favorite daytime talk show, the Ellen DeGeneres Show. In fact, Anne Nabours had the idea to call the Times-Herald about her daughter's journey after a comment she had made while watching a recent episode of the popular show. Angelique was exercising on her Air Walk when the show was featuring a winner of the popular weight-loss competition show "The Biggest Loser" who had lost about 100 pounds. "She stopped dead in her tracks and said, 'Hey, what about me?! Check it out!' " Anne Nabours said. "And I thought, that's right. She does deserve recognition." Anne Nabours said their goal was to get Angelique to 140 pounds. She reached the goal about a year ago, lost a little more, and has never weighed more than 140 since.
"She's such an inspiration," her mother said. "What's amazing is that she's doing it all on her own, and she keeps (the weight) off. It's her own determination." Angelique Nabours also meets regularly with a nutrition management consultant from Kaiser Permanente Vallejo Medical Center. She said she misses all of her favorite foods, which have now been replaced by vegetables, fruit and other healthier choices. "I still like them, but I know they are bad for me," she said. However, she's more excited about her whole new wardrobe. Due to her weight loss, she dropped 16 dress sizes and is now a size 10. "I can now wear cute, skinny clothes," she said. Her healthy habits also affected her parents. "I used to be a smoker, and I had to quit. That was hard," her father Ed Nabours said. "But what she's doing is ever harder." Angelique Nabours' simple advice to other people trying to lose weight is: "Don't give up." Contact staff writer Irma Widjojo at (707)553-6835 or iwidjojo@timesheraldonline.com. Follow her on Twitter @IrmaVTH.
Posted by DSD at 6:00 AM

Email ThisBlogThis!Share to TwitterShare to FacebookShare to Pinterest
Labels: Down syndrome, health, self advocate, weight loss