girl with Down syndrome, 12, beaten up by gang in park attack 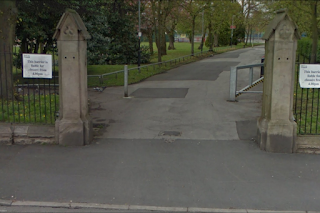 by Sam Chadderton from Mirror News:


A 12-year-old with Down syndrome has been hospitalised by a vicious girl gang who beat her up in a park.
The youngster was playing in a local park in Bolton, Greater Manchester, when she was assaulted by a group of older girls.
The girl was taken to Manchester Children's Hospital with a serious head injury.
At first she said she had fallen off a swing after the incident on Wednesday.
But her family later reported to police on Friday that she had been attacked.
The nasty assault happened in Bobby Heywood Park, Great Lever, at 7.30pm on Wednesday, June 12.
Police are now appealing for anyone who may have been in the park at the time, or has any information about what happened, to contact them.
Detectives are yet to interview the girl as she is still “unwell in hospital”, police said.
Insp Andy Sidebotham, said: "This incident has quite rightly caused a lot of concern both in the community and on social media networks and I want to reassure everyone that we are taking this extremely seriously.
"Due to the girl's obvious vulnerability, this case is clearly very emotive, but I want to stress to everyone that we have launched a painstaking investigation to get to the bottom of what happened.
"It is important that officers are allowed to do our jobs and get on with catching those responsible.
"With that in mind we have been speaking to the victim, her family and witnesses, but we still want to hear from anyone who may have been in the playground last Wednesday afternoon.
"The victim initially stated she had fallen off a swing, but her family contacted us several days afterwards to state she had actually been assaulted.
"So, did you maybe see the victim in the park at the time and notice a group of girls hanging round?
"You may not have thought much of it at the time, but clearly this could be relevant to our investigation.
"If you have any information than please get in touch."

12-year-old girl with Down syndrome's injuries were accidental, investigation reveals
from the Bolton News:
The injuries suffered by a 12-year-old girl with Down’s syndrome as she played in a Bolton park were “entirely accidental”, a police investigation has revealed.
Police had originally issued a statement saying she had been attacked by "a group of older girls".
But today police issued a second statement saying the youngster had received her injuries after she fell off her bike and banged her head.
Supt Steve Nibloe, from Bolton police, said: "We now know for sure that this girl's injuries were entirely accidental. She simply fell off her bike and banged her head.”
During the police investigation, an independent witness, who was in the playground at the time, told police how the accident actually happened.
The Bolton News understands that the witness was a woman who saw the accident, which happened near the park swings, and called an ambulance.
The first statement, issued by police on Monday, said the girl had been taken to hospital with serious head injuries after she was injured while playing in Bobby Heywood Park, Great Lever.
The girl's parents initially thought she had fallen off a swing, but it is understood they were later given new information that suggested she had been assaulted, and the matter was reported to the police.
Police then issued a statement saying the girl had been assaulted by a group of older girls and launched an appeal for witnesses to the incident.
Supt Nibloe now said there was categorically no other person involved.
He said: “We did receive a report that she had been assaulted and, as everyone would expect, we had to investigate such a serious allegation.
"However, that investigation is now complete and we now know for sure that no-one else was involved.
"I want to add however, that all the rumours and speculation about this incident have been unhelpful and potentially damaging to the investigation.
"We always stressed that we didn’t have the full facts and we would update people once we knew what had has happened.
"We have now done this so we trust the girl can be allowed to recover from her accident in peace."
See these earlier stories:
Community's horror after girl, 12, attacked in Bolton park
12-year-old girl with Down's syndrome 'attacked by gang of girls in park'
Posted by DSD at 5:00 AM