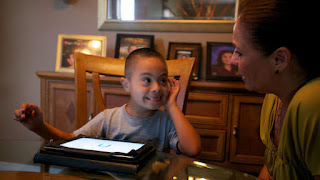 By Alejandro Dávila from the Imperial Valley Press:
Diego is a 7-year-old boy with Down syndrome whose parents wish for him to get what most want for their children: the best education possible.But determining what is the best education for Diego has become an issue of contention between El Centro Elementary School District and Diego’s parents, Keila and Everardo Rodriguez. So much so that since 2009 the district and the Rodriguezes have been at odds over the individualized educational program offered to their youngest son, who is just one of more than 3,000 special education students enrolled in county schools.  Disputes could not be resolved and consequently an unprecedented lawsuit in the Valley’s collective memory recently took place.
In the lawsuit filed late last year, the Rodriguezes asked that Diego be placed in general education with full-time support of an aide. According to the lawsuit’s ruling issued in April, Diego’s parents also contested the amount of therapy provided under his individualized educational program, or IEP, which defines the objectives and services a child with disabilities has.
Asked about the matter, El Centro school district Superintendent Jon LeDoux said in an e-mail, “I am very sorry but I cannot comment publicly on the status of any student due to state and federal privacy laws.”  The district was asked if someone could comment on students with Down syndrome and their inclusion in general education without talking about a specific
case

.  LeDoux said “our district is committed to providing our students with the supports they need to receive a quality education in the least restrictive environment