Graduation a fork in the road for fraternal twins in Va. 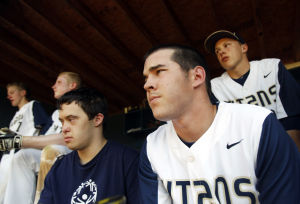 by Robert Anderson from the Roanoke Times:
SALEM, Va.  — Almost every varsity baseball game at Hidden Valley High School over the past three years ended the same way.
With Nic Ratliff striking out.
Each home victory by the Titans from 2011 to '13 was punctuated by an unusual postgame ceremony near home plate.
Ratliff, the Titans' star senior shortstop, would hold a bat menacingly over his right shoulder as his twin brother, Ben, delivered three pitches.
Strike one.
Strike two.
Strike three.
Hidden Valley players would cheer and applaud. Then Nic would put his arm around his brother's shoulders and the two boys would walk off together.
Just like they did Friday.
Nicholas London Ratliff received his Hidden Valley diploma during the school's graduation exercises at Salem Civic Center.
Benjamin Paul Ratliff also wore a cap and gown as he took part in the ceremony with his classmates.
However, Ben was not handed the same diploma as his brother. He received a "certificate of completion" as a special education student in Roanoke County, although he will go through some additional programs at the high school. Ben likely will remain at Hidden Valley until he turns 22.
You see, Ben was born with two strikes against him.
Ben has Down syndrome.
For most of their 12 years in public schools, Nic and Ben Ratliff were not in the same grade. Ben was a year behind until they moved from Salem halfway through Nic's sophomore year.
When Nic enrolled at Hidden Valley, his twin brother was moved up to the 10th grade.
Nic will strike out on his own this fall when he enrolls at Bluefield College.
They sat side by side Friday in blue and gold gowns until their names were called.
"I'm really happy we get to do it together," Nic said before the ceremony. "It seems like a blink of an eye and we're already here."

Rodney and Stephanie Ratliff were young 20-somethings when they decided to start a family.
The couple had known each other since they were toddlers attending Ghent Grace Brethren Church in Roanoke.
"The one that has 'Jesus Saves' on the top," Rodney said.
Rodney graduated from Patrick Henry High School, where he played basketball and baseball. He was living in Charlotte, N.C., when he made a visit to Roanoke and reconnected with Stephanie Wise, who graduated from Salem High School in 1988.
Rodney and Stephanie were married in 1991, and three and a half years later on Feb. 24, 1995, the twins were born ... nine weeks early.
Nic weighed 3 pounds, 13 ounces. Ben weighed 2 pounds, 15 ounces.
Nic was born with the umbilical cord wrapped around his neck. His lungs were underdeveloped.
Then, one of the doctors approached Rodney with news about Ben. He suspected Down syndrome.
"He said, 'I think, but I'm not sure,' " Rodney said. "They were talking about his eyes, and the crease in his hand and the space between his toes. They had to do the genetic testing. A week later we knew."
Down syndrome is a genetic disorder that results in mental retardation and characteristic facial and other physical features. It is also called Trisomy 21, because children with Down sydnrome are born with a third chromosome attached to the 21st pair.
Approximately 400,000 people in the United States have Down syndrome, according to a spokeswoman for the National Association of Down Syndrome. However, no statistics are available to determine how rare it is for one fraternal twin to have Down syndrome while the other is born normal.
"It's very random," Stephanie said. "It can happen to any couple or any age. It just hit us. We were young. We were 25. It's kind of a fluke, but it's very rare at the same time.
"I was heartbroken. It was a hard thing to take. I felt guilty for being sad. But you do grieve for the baby you dreamed of."
Nic Ratliff was the type of high school athlete most teenagers strive to be.
He was the starting quarterback on Hidden Valley's football team and an All-River Ridge District shortstop for the baseball team.
Nic and Ben were tee ball teammates, swinging for the fences and dreaming big dreams. Then suddenly, Nic noticed he was advancing while Ben was staying behind.
One day, his parents had to tell him why.
"I kept asking, 'Why does Ben not do as much as I do?' " Nic said. "They sat me down one day and tried to explain it, but I didn't fully understand it until I got a little older."
Nic knows how to handle bad bounces.
His maternal grandfather, Winfred Paul Wise, died two weeks ago on the Wednesday of the River Ridge baseball tournament. At the funeral the day after Hidden Valley lost to Cave Spring in the championship game, Nic placed his all-district medal in his grandfather's coat pocket.
Nic wishes he could give a regular life to his brother.
"If that were to happen, I'd be extremely happy for him," Nic said. "There are days I think, 'What if?' But it happened for a reason and he's here teaching me lessons every day.
"For me, it's a comfort level. You get so excited and so into the games you're playing and then you see your brother and it calms you down."
Nic might be the bigger brother, but Ben is still his older brother.
"You don't feel like you have to go through stuff alone," Nic said. "You always feel like you've got a brother on your back.
"Even if it's 5 in the morning and you have practice and you don't want to go, I know that Ben would love to be out there no matter what."

Ben Ratliff has been part of more varsity teams at Hidden Valley than his brother.
He has served as a manager for the football, boys basketball and baseball squads.
Ben walks the sidelines during football season, is on the bench during basketball season and sits in the dugout during baseball season.
"You can't tell him he can't do something," Hidden Valley basketball coach Troy Wells said. "He's as determined as anybody I've ever been around to accomplish a task."
Wells and many spectators inside VCU's Siegel Center learned that firsthand as the clock neared midnight March 12, 2011.
It was the night Ben Ratliff showed the state that he has skills.
Ben is good with numbers. He can watch the sports ticker on ESPN and recite every score that passes by. He can memorize each player's number on Hidden Valley's basketball roster and come up with a corresponding jersey number of an NBA player.
But Ben also can shoot a basketball, going back to the time in a Salem recreation league when former Virginia Tech quarterback Cam Young first let him put on a uniform.
One day, Wells found out.
"He'd tug on my shirt and say, 'Coach, I want to shoot a free throw.' "
Thus, a tradition was born.
"We'd start doing it every day after practice," Wells said. "He thought that was the greatest thing since bread and butter."
Few people expected Hidden Valley to reach the VHSL Group AA Division 4 championship game in 2011. Even fewer expected the Titans to give defending state champ Potomac Falls a close battle.
Hidden Valley lost 58-55 when 5-foot-6 Potomac Falls guard Pete Simoneau made a 3-pointer at the buzzer.
It was not the last shot of the night.
Wells let Ben Ratliff have that one.
The Hidden Valley coach obtained a basketball from a VHSL official. The Titans, with jerseys stained by sweat and tears, gathered around the lane by one of the baskets in the 7,500-seat arena.
Ben, a natural right-hander, took two shots left-handed.
The first one glanced off.
The second one?
Swish.
Nice gesture? It was more than that.
"From the outside, people see Ben and they just think we were doing it 'for' him," said Carter Wright, one of the stars on the 2011 team who now plays at Mars Hill College in North Carolina. "But from the inside, he literally was the heart and soul of that team.
"Every day he pushed us to be better. I wanted to win that for Ben so bad."
There is a reason why Nic Ratliff wore jersey No. 21 when he played baseball for Hidden Valley.
In tee ball, Nic wore jersey No. 1 and Ben wore No. 2. Nic had No. 1 for Hidden Valley's JV team but that number was taken when he moved to the varsity.
So Nic picked 21.
"He said, 'Ben was born first so let's put the 2 first and then the 1 for me,' " Rodney Ratliff said. "So he came up with 21 and said, 'Now Ben will always be out there with me helping.' "
Other than half of Nic's freshman year when he transferred to Hidden Valley and Ben stayed behind at Andrew Lewis Middle School, the twins have been inseparable.
"We do almost everything together," Nic said. "We clean up the same time. We get up the same time. We usually go to bed the same time. There's not much we do apart."
That is about to change.
Nic will go to college. Ben will stay home.
"I've tried to keep it off my mind how big a difference it's going to be without him around," Nic said.
Ben, a Virginia Tech fan, tells a bystander that he is going to Virginia Tech to play basketball.
No one really knows what is in Ben's future. His parents think he has the personality to perhaps become a host at a restaurant.
"I looked at him one time and he said, 'I'm an actor,' " Rodney said. "We don't understand sometimes what he understands and what he doesn't. But he understands a lot more than we think he does."
Stephanie Ratliff understands that Friday marked a turning point in her family's life.
Eighteen years ago her simple hope was that her newborn babies would live through the night. Friday morning she and Rodney joined hundreds of other sets of parents watching their children pass through the portal toward adulthood.
"We're getting a little sad," Stephanie said. "I wasn't until about a few weeks ago. I'm glad, God willing, that they grow up. That's what they're supposed to do."

Information from: The Roanoke Times, http://www.roanoke.com
Posted by DSD at 4:40 PM