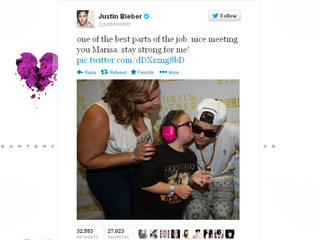 from ABC 10 News:
A 10-year-old girl from Hemet had her dream come true: meeting Justin Bieber.
Marisa Cox met Bieber backstage before his concert at the Valley View Casino Center on Saturday.
On Sunday, the singer posted a photo of himself, Marisa and her mother on Twitter with the message, "One of the best parts of the job. Nice meeting you Marisa. Stay strong for me!"
10News caught up with Marisa on Saturday afternoon at the Thairapy Hair Salon in Point Loma as she got all dolled up before the concert.
"She just keeps saying, 'Oh my gosh, so excited,'" said Adele Cox, Marisa's mother. "She doesn't know how to process it all. It's overwhelming."
Marisa was born with Down syndrome and suffers a life-threatening kidney disease following a kidney transplant. Her family told 10News the one thing that kept her spirits up during those long hospital stays was Bieber's music videos.
"I don't know what it is, but there's something about him that makes her feel better and happy, and when she's really, really sick in the hospital, I put this stuff up… it perks her up," said Adele.
When Marisa's friends at Rady Children's Hospital noticed her emotional boosts from Bieber's music, Sharla Hank – another mother who has a child with Down syndrome – knew exactly what could cure her spirits.
"Sharla contacted Magic 92.5 and we were able to meet him," said Adele.
Posted by DSD at 10:06 AM