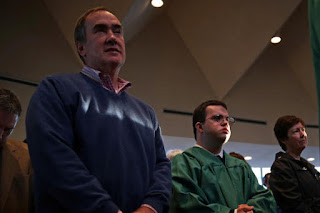 A few months before Ryan Burke became the first student with Down syndrome to attend Notre Dame College Prep in Niles, his father made an emotional plea to his son's classmates.
"All we ask is that you say 'hi' to him. Just give him a chance," Kevin Burke recalled saying at a school assembly. "He'll take it from there."
Living up to his father's prediction — and demonstrating the success of a remarkable initiative Notre Dame hopes other Catholic schools will emulate — Ryan Burke, 19, graduates Saturday. His yearbook features pictures of him on the swim team, student council and marching band.
He also has something perhaps more precious — memories from four homecoming dances and two proms, as well as a cellphone filled with messages from friends he's made along the way.
The ceremony will mark a sweet victory for the Western Springs parents, who have been campaigning for Ryan's inclusion in normal classrooms since preschool. Kevin and Elaine Burke worked tirelessly to persuade Notre Dame's administration to become one of only a few Catholic high schools in the country with a structured program for students with severe special needs.
And Notre Dame officials say Ryan's example has left a permanent mark on the school, where students now don't think twice about seeing a classmate with special needs carrying the school banner at a football game or in line at the cafeteria.
Next year, the school expects 10 special needs students, with many more applicants than can be accommodated.
"He's a trailblazer," said Principal Dan Tully. "The families have been finding us, sometimes years before they go to high school."
From the time Ryan was a little boy, his parents wanted their active, social, special needs child to have the same access to experiences as his older brother and three sisters.

When he was 3, Elaine and Kevin Burke fought for him to attend LaGrange Public School District 105, which at the time didn't allow children with disabilities to be part of the preschool program.
The Burkes recall collecting hundreds of signatures from neighbors for their cause, then suing the district for violating Ryan's rights. A federal appeals court in Chicago agreed with the Burkes, but by then Ryan had already completed preschool at a nearby park district program.
A few years later the couple moved their family to nearby Western Springs, where they believed schools would offer Ryan an inclusive and quality education, said Kevin Burke, a personal injury attorney.
But as Ryan wrapped up eighth grade, his parents wanted him to have the option to choose a Catholic high school, as two of his siblings had done. The Burkes, who are Catholic, also felt strongly that Catholic students should learn acceptance and diversity in a high school population that mirrored real life.
"I wanted kids to practice what we preach," Elaine Burke said.
At the suggestion of their eldest daughter, Megan, who was earning a doctorate in special education at Vanderbilt University in Nashville, the Burkes visited Pope John Paul II High School in Hendersonville, Tenn. The school's Hand in Hand program assists students with severe special needs while also allowing them real high school experiences.
Inspired, the Burkes called several Catholic high schools near their home, hoping to start a similar program. Most didn't return calls, and those that did told them it was impossible given financial constraints and declining enrollments, Kevin Burke said.
A family friend and longtime employee at Notre Dame Prep urged the Burkes to approach leaders at the 800-student boys school on West Dempster Street.
Unwilling to be rejected again, the Burkes made their pitch — then paid for plane tickets to Tennessee for Tully and the school's then-executive vice president to see in person how Hand in Hand operated.
"They were advocating for their child, which is exactly what so many parents of children with disabilities do," said Adrienne Parks, Hand in Hand coordinator. "They set a goal and figured out what they had to do to meet it."
Notre Dame Prep officials were convinced, and soon after received a private donation from Chicago Ald. Ed Burke and his wife, Illinois Supreme Court Justice Anne Burke — a co-founder of Special Olympics. The money allowed the effort to begin.
The Burke Scholars Program is named after the alderman and his wife, who are no relation to Kevin and Elaine Burke.
When Ryan put on the school uniform for his first day in 2009, his parents were thrilled.
"I was nervous. We got here early, so early … but he traipsed right in," Kevin Burke said.
"I said, 'Hello. I'm Ryan. It's me. I'm new here,'" Ryan Burke added.
In no time, the grueling traffic Kevin Burke endured to drop his son off every day became routine. And Ryan, in turn, learned his new schedule: specialized classes for math and English; inclusion for social studies, religion, physical education and everything else.
School officials also adjusted. Initially based in a smaller classroom with one full-time teacher, the Burke Scholars upgraded to a larger room with two teachers as the number of students grew to eight this year.
Teachers underwent extra training and spent time modifying curricula for their students, said Tully, the principal.
The Burkes and other parents held annual fundraisers, which brought in as much as $50,000 each year to help offset costs.
Students, meanwhile, learned to appreciate their new classmates through a "Burke Buddies" program. Everyday high school encounters also helped.
"It's been fun, it's been interesting, it's been challenging," Tully said. "But I don't think there's anyone who wouldn't say that it has made us a better place."
Inspired by the success at Notre Dame, the Archdiocese of Chicago is working to improve its offerings to students with severe disabilities, said Sister Mary Paul McCaughey, superintendent of schools for the archdiocese.
"We may not be able to service every student at every school, but the goal is to have something for people within a geographical radius," McCaughey said. "That's going to take a while to ramp up, but it's a hope."
Ryan Burke plans to attend Elmhurst College next year, although he's not sure yet what he'll study.
For now he's excited to put on a cap and gown, accept his diploma and celebrate with a chocolate shake after the ceremony.
"There should be no limits, right, bud?" Kevin Burke asked.
"Right. Like a lawyer, or FBI agent," his son said.