Life with Down syndrome is full of possibilities 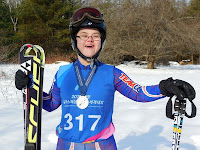 by Liz Szabo from USA Today: