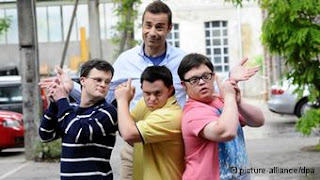 from DW:
An estimated 50,000 people live with Down syndrome in Germany, and many of them feel marginalized in their everyday lives. Now a famous German TV host is working to raise awareness for them.
German TV host Kai Pflaume is on a mission - he wants to raise awareness for people with trisomy 21, or Down syndrome. In a new four-part TV series to be broadcast in June on Germany's main network ARD, he visits people living with Down syndrome and provides insight into their everyday lives. Called "Show Me Your World," the project aims to show how people with Down syndrome can live very normal lives.
Happy in their own world
Down syndrome is a genetic disorder caused by the presence of all or part of a third copy of chromosome 21, hence the name trisomy 21. Since the strength of this disability can vary, many people with Down syndrome live completely normal lives with their families, while others need more help.
Support is provided for them and their relatives by the German Down Syndrome Network, whose chairman is Heinz Joachim Schmitz. He often notices how people without a disability react when they meet someone with trisomy 21. "At first, they're a little afraid," he said. "They take two steps back, then three steps forward - once they've made contact with them."
That's because people with Down syndrome are often noticeably cheerful, with fewer hang-ups than others. "They have their own world, and are settled and happy inside it," said Schmitz, who thinks it's a shame that so many have such a stand-offish initial reaction. "People with Down syndrome belong to our society, and should not be marginalized."
Narrower attention span
André Zimpel is an educationalist and neuropsychologist currently leading a study into the lives of 1,000 people with Down syndrome. He is especially interested in how they learn, and what they learn best. What is already clear is that people with trisomy 21 have a narrower attention span than others. "This altered attention capacity is not just a weakness, it's also a strength," said Zimpel. "But special schools often can't support it, because people with trisomy 21 are more dependent on abstraction. That's why many of them can already learn to read and write at the age of two or three."
He would also like to see Down syndrome enjoy more attention in society - much like autism has at the moment. But unfortunately, says Zimpel, we live in a society with an "intelligence cult," where there is almost nothing worse than being considered "stupid." "In an environment like this, there is a lot of disdain for people with trisomy 21, because they are assumed to have no intelligence, which is not actually true."
For a long time now, Germany has had so-called "inclusion schools," where children with and without disabilities learn together. This not only benefits children with disabilities - it works the other way too. "It is especially good for children without trisomy 21, because it gives them an opportunity to help others," says Zimpel. "And in neuropsychology we've proved that helping people makes you just as happy as chocolate and winning money."
Controversial blood tests
And yet, fewer and fewer children with trisomy 21 are born in Germany. That's mainly down to pre-natal diagnostics, the medical examination of unborn children. Doctors are learning more and more about embryos - and they are doing so earlier and earlier in pregnancy. Blood tests can now diagnose Down syndrome very early. And when it's found, it's estimated that around 90 percent of prospective parents decide to abort the pregnancy.
This so-called Prenatest has been legal in Germany since 2012, but it remains ethically contraversial. Critics say the test does not serve any medical or therapeutic purpose - since Down syndrome is incurable - but is simply genetic selection. Schmitz is appalled that the test was made legal: "I think this test is absolutely wrong because I fear that people with Down syndrome will die out."
Schmitz welcomes the fact that a famous face like Kai Pflaume is putting the spotlight on Down syndrome, since a lot of his own work is about educating the public and encouraging greater acceptance of people with Down syndrome. He says only people who realize that Down syndrome is not an illness - and that people with this disability are not more stupid than others, only different - are able to approach them with an open mind and help them take their place in society.
Posted by DSD at 1:10 PM