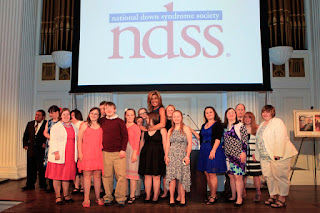 by Stephanie Webber from ology.com:
The National Down Syndrome Society (NDSS) had its annual Spring Luncheon in New York City Tuesday afternoon, giving a warm welcome to Today Show Co-Host and Dateline Correspondent Hoda Kotb as its honored guest. Joined by self-advocate Jordyn Dannenbaum as well as many other family, friends, and supporters of the campaign, the event delivered inspiring speeches and raised an astounding $125,000.
"This is one of those things that you don't really know why you are being honored because there's a huge room filled with rock stars. I mean I was sitting next to Jordyn the whole time, who got honored today. I just felt so lucky to be next to her. To be honored by the group is just terrific," Kotb said of the event. "I actually have an aunt—my mom's sister who's like her favorite sister and I was named after her—my mom's sister has Down syndrome. So its one of those things when you meet someone with Down syndrome all you want is a fraction of their light, of their happiness, of their joy. You hope you can carry on a legacy like that and you realize that you have a lot of shadows in your heart when you meet people who don't. And I think that's what I really took away from it."
The NBC Today Co-Host and Correspondent wrote a speech for the crowd, took pictures with those honored, and was also joined by NDSS Goodwill Ambassador Chris Burke, who played Corky on the TV series Life Goes On.
"I still don't know why I was so lucky enough to be honored, but I do know that was a room full of people that just filled me up and I feel really, really, really privileged."
Posted by DSD at 12:36 PM