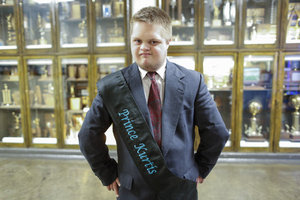 By Amy Renee Leiker from The Wichita Eagle:
Kurtis Tinius looks dapper in his suit and tie, passing out stickers promoting his prom king candidacy at East High School.
He’s not shy about spreading the word: He wants Saturday’s crown.
Despite speech that’s a little hard to understand, he’s a pretty smooth talker.
“Vote for Kurtis,” the 18-year-old chimes. “Kurtis for prom king.”
Like seven other senior boys at East, Kurtis this spring was elected to the school prom court. Saturday night he’ll know who gets the crown.
But there’s something different, besides his dress, about the teen who wears a suit and tie to school every day: Kurtis has Down syndrome, a genetic disorder of the chromosomes that causes delays in cognition and growth.
School officials say he’s the only special education student at East they can remember who has been given the chance to experience the flurry of prom in a way few others do.
And support for him has been overwhelming.


“The student body has exploded,” said Jason Crippen, a special education teacher at East and one of Kurtis’ instructors.
Laurel Scott, another East teacher and the prom sponsor, agreed.
“I just think it’s cool to see how everyone is so supportive,” she said. “The other guys on the prom court, they are so excited for him.”
Kurtis, who teachers say is well-known and liked at East, learned of his nomination on April 4.
“I was voted into the Prom Court today!!!!” he posted on his Facebook page with the help of his mother, Mandy Tinius. “We’ll see if I am the King at prom on the 27th.”
He echoed his excitement with a quick “Happy!” and a grin when asked this week how he felt about the honor.
As prom approached and students cast their votes for king and queen, the buzz about Kurtis’ nomination caught on at school.
A few students made him campaign posters. Teachers and his classmates wore suit jackets and ties.
Then junior Kylee Jarrett, a teacher’s aide in Crippen’s class, decided to help spread the word by making a campaign video.
The video — a 61-second clip of Kurtis and other special education students dancing to Justin Timberlake’s “Suit and Tie” — was posted on YouTube on Monday morning.
“I never heard of anything like Kurtis being on there,” Kylee said of the prom court. “So we want to make it extra special.”
By Friday evening, the video had been viewed more than 1,500 times, including classroom viewings at East and in a commons area.
Chuckling, George Depew admitted Kurtis is stiff competition. The senior said he “just kind of gave up for my own chances” to be named prom king after the video came out.
“I’m telling all my friends to vote for Kurtis,” Depew said, smiling when Kurtis murmured appreciation for the support.
Most of the others elected to prom court are doing the same, he said. Fifteen students — seven girls and eight boys — are in the running.
“You got to love a guy who wears a suit every day,” Depew said.
East High’s prom will be held Saturday at the school. Votes will be tallied by about 9:30 p.m., said Scott, the prom sponsor.
The king and queen should be named by 10.
Other candidates for king are seniors Nolan Badgett, Matthew Clough, George Depew, Jake Faflick, Charlie King, Andrew Koehler and Kevin Wong. Candidates for queen are seniors Emily Davis, Zahava Davis, Yazmin Guzman, LaRissa Lawrie, Carol Viluethpad, Haris Vrahliotis and Cate Wesselowski.
“So if someone says, ‘Kurtis you’re the prom king,’ what are you going to do?” Crippen asked his student.
A wide smile brightened Kurtis’ face.
“Happy,” he replied.
Read more here: http://www.kansas.com/2013/04/26/2779451/video-helps-build-support-for.html#storylink=cpy
Posted by DSD at 6:00 AM