Teen with down syndrome honored as homecoming and prom queen 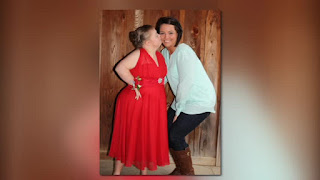 by Kym Clark from CBS Atlanta:
A Mid-South teenager had her dreams come true when she was homecoming queen at Bolivar High School. But Kara Marcum did not stop there. The senior, who was born with down syndrome, also earned the prom queen crown.

Marcum was crowned prom queen on Friday.
But back in January, Action News 5 met the popular senior when she was in the running for homecoming queen.
Her parents never imagined their daughter would receive such high honors when they first learned she had down syndrome.
Her PACE class teacher, Angela Galloway, says Kara's personality is what makes her beloved by the entire school.
Now that she has earned the title of both homecoming queen and prom queen, Kara has her sights set on graduation. She will earn her diploma in just a few weeks.