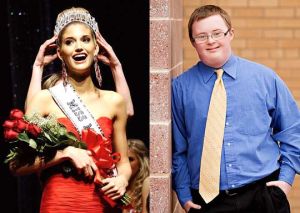 by Chuck Rupnow from Leader Telegram:
Most every young man going to the junior prom dreams of having a beauty queen as his date.
Charlie Gainey's date could bring her own crown.
The 18-year-old with Down syndrome will have Miss Minnesota USA Danielle Hooper as his date Saturday at the Menomonie High School prom.
Danielle, 20, a junior at UW-Stout in Menomonie from Inver Grove Heights, Minn., admitted during an interview Wednesday that she has a very special reason for agreeing to be Charlie's date.
"It's so great that his class nominated him to be on the prom court," said Danielle, who plans to graduate next year with a retail merchandising degree.
"Actually, I have a 2-year-old cousin, Eden, in Seattle, who was born with Down syndrome. That was a big surprise to our family and was my first introduction to it. She is such a joy and blessing to us, so I kind of have a soft spot for that, and knowing Charlie's story drew me to this."
Danielle works part-time at UW-Stout's financial aid office with Julie Schultz, who has a child on the same Special Olympics team as Charlie. Once Charlie was nominated to the prom court, Schultz suggested Danielle be his date.
"She asked me about it, and I thought it would be such a great opportunity," Danielle said, adding that she contacted Miss Minnesota officials for approval.
Danielle also got approval from her boyfriend, Alex Reisner, 21, of Minnetonka, Minn.
"I called him and told him about it, and he said, ‘Yes, you have to do that.' "
Danielle thought of wearing the same dress she wore when winning her title in late November, but changed her mind, saying, it "might be a bit too much for prom, so I get to go shopping for a new dress, and every girl likes a new dress."
Dinner first
Plans call for Charlie and Danielle to go to Jake's Supper Club near Menomonie for a meal before heading off to the grand march at the high school and dance at UW-Stout.
"I've been given such a wonderful opportunity to make people happy this way," said Danielle, who competes in the Miss USA 2013 pageant June 16. "How can I resist?"
It could be quite a day for Charlie, who will be competing in a Special Olympics swim meet earlier Saturday in Eau Claire.
"It's an honor and really means a lot to me and my date," Charlie said Wednesday afternoon. "Whether I am king or not really doesn't matter; it's about dinner, the dance, prom, and a lot about Danielle."
Charlie, who will be a co-captain on the school's swim team next season, also is involved in choir and various other Special Olympics events.
For the prom, Charlie will don a tux from his grandfather, Owen Perry of Milwaukee.
When students heard rumors of Charlie's date, "they wanted to see her picture," Charlie said. When they did, they thought she was "beautiful."
‘Pretty good' dancer
Charlie considers himself a "pretty good" dancer, so he's not too worried about that aspect, and he's not concerned if he is named king or not.
"School always comes first," he said. "Being king doesn't matter. It's just going to be fun."
Charlie's mother, Anne Gainey, says she and her husband, Dan, and others, "just want this experience to be very memorable; where it's no different than anyone else going to the prom."
"I don't think I was prepared for my son to be making news with Miss Minnesota, but I think there are so many really good stories inside this story," Dan said Wednesday.
"It shows what people with disabilities can actually accomplish; what can be accomplished when you include kids with special needs in regular classrooms; and what a great person Danielle is to want to do this," he said.
"It's also a great teaching moment for Charlie, on how you treat women and how to be respectful of women. We've heard she is shy, but we think Charlie will be able to pull her out of her shell," Dan said with a laugh.
Charlie is one of 10 boys nominated for king. Voting is today. No queens are selected.
"If Charlie wins a couple of swimming events, then goes out to eat and to a dance with Miss Minnesota, I think that's a good day for any guy," Dan said.
Students praised
Bart Boettcher, activities director at Menomonie High School, had high praise for the students selecting Charlie.
"Everybody's excited for him," Boettcher said. "We've had many diverse students chosen for prom and homecoming. That says a lot about that class and the school in general."
Denise Wallace of Future Productions, producers of Miss Minnesota USA and Miss Wisconsin USA pageants, said: "It's no surprise to us that Danielle would be willing to be Charlie's date for his prom. She is an outstanding young woman who has been an example of what a Miss USA titleholder should be. The fact that there are outstanding young people like Danielle and Charlie coming up in this generation gives us great hope and faith for the future."
Rupnow can be reached at 715-830-5831, 800-236-7077 or chuck.rupnow@ecpc.com.
Posted by DSD at 11:56 AM