Breaking through the disability barriers in Bankok 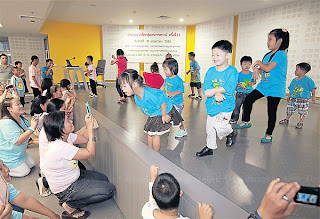 from the Bankok Post:
A group of parents and supporters based at Siriraj Hospital work for a better future for children with Down syndrome.

In Wang Lang market in Phra Nakhon district, city life hums and throbs and commuters and residents rush about their daily chores. It's a typical everyday scene.
But a short distance away, inside a building, a group of people are captivated by a starkly contrasting scene and a much slower pace of life. On a stage, 18-year-old Nong Fah dances slowly and carefully in front of a group of 50 parents and their children.
The event is the 21st annual meeting of children born with Down syndrome and their parents held at Siriraj Hospital recently.
The father of Nong Fah, a 53-year-old teacher who asked not to be named, and all of the people in the room clapped as she completed her performance successfully.
"We gave her special education, such as physical and speech training, since her birth," he said, to help her delayed physical and mental development.
"I'm glad she is healthy today. It was tough at the beginning and her future worried us."
Having a child with Down syndrome in Bangkok, or indeed anywhere, is a tough call for parents. Most urban folk are busy these days rushing to keep up with meeting their daily requirements such as access to basic education, vocational training and transport.
Health and education authorities seem to pay little attention to creating the special facilities and utilities for people with intellectual disabilities, which the Bangkok Metropolitan Administration estimates at up to 114,000 in the capital.
An exact number is not available as many parents don't register their children with the government despite benefits such as tax exemption, free healthcare access and rights to loans. The reasons are varied - shame, fear of discrimination, and so on.
The mother of an eight-year-old girl who joined Siriraj's annual meeting shared her daughter's experience of being rejected by several schools because of Down syndrome.
Though the child was finally accepted by one primary school, her education is going nowhere. The mother found her educational instructor did not pay attention to the special needs of her daughter. Other students were a priority.
"Urban society tends to see these children as a minority group," Dr Pornswan Wasant, paediatric geneticist at Siriraj Hospital's paediatrics department, explained.
Twenty five years ago, she formed a group comprising parents whose children have Down syndrome to educate and instruct them on how to take care of their children.
The group and other groups of disabled people were successful in pushing forward the National Education Act 2002 which opened channels for intellectually disabled children to access schools.
About 104 schools nationwide - 87 in Bangkok - offer places for children with Down syndrome to study together with normal students.
Ten schools - three in Bangkok - have been established to provide special education for the disabled.
Though many schools are available for students with Down syndrome, Dr Pornswan pointed out that most of them only graduate students at Prathom 4-6 (Grades 4-6).
Very few special students manage to get to high school or university. After leaving primary school, most of them stay at home.
Their IQ and physical abilities are more likely to decline if they don't have constant mental and physical training, the experts say.
This is a reflection of the fact that the government has yet to provide enough choices for them to continue their special education and vocational training after graduation, Dr Pornswan said.
Only about 10 special vocational training centres are available in Bangkok with limited personnel resources.
"This is not enough," Dr Pornswan said. Such centres should be located in every district of Bangkok because children with Down syndrome have difficulty in travelling alone.
But the regulations governing the centres limit them to accepting only those aged 15-18, which prevents the development of kids with Down syndrome who need training from a younger age.
In addition, most parents find they do not have enough time to take care of their children and that undermines even further the chance to develop their mental and physical capabilities.
But while struggling with inequitable access to basic facilities and utilities, those with intellectual disabilities in the capital have more chance of gaining work than those in the provinces thanks to generous private companies.
For example, a coffee company recruits the disabled in a serving capacity, while a fashion firm readily hires the intellectually disabled for special tasks.
"The point of getting them a job is not a salary," said Suchart Owatwansakul, president of the Association for Persons with Intellectual Disability. "It's to offer them social space, and also to continue their physical and mental development."
From his experience of working with people with intellectual disabilities, Mr Suchart has found there is little resistance to hiring them on capability grounds.
Most rejections are based on the problem of commuting to a work place, while some employers only want to hire people who can be competitive with other staff.
To gain social acceptance, said Mr Suchart, parents must be prepared to play a major "coaching" role in their children's lives, while encouraging their social participation.
This may force parents to leave their jobs. "But I don't want parents to think of having a child with Down syndrome as unfortunate," Mr Suchart said.
"The child could create a big change in their parents' lives by encouraging them to have more diverse interests. That could be, perhaps, a more pleasant and sedate kind of life."
Posted by DSD at 2:23 PM