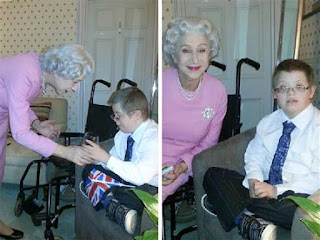 by Randee Dawn from Today:
Dame Helen Mirren all by herself is pretty terrific. But put the 70-year-old Oscar winner in the outfit of the Queen, and she wears it like a superhero.
Recently, she stormed outside mid-performance of her London show "The Audience" (in which she plays Queen Elizabeth II) to unload on noisy drummers (and later publicly wore a handmade T-shirt supporting their cause). But her latest deed goes one step further: Last week, she agreed to have tea with 10-year-old Oliver Burton, who has Down syndrome and has been battling cancer for much of his short life.
Burton was diagnosed with leukemia in 2006, and was recently given a terminal diagnosis, according to a Facebook page set up to support him. But he had one dying wish: To have afternoon tea with the Queen and visit Buckingham Palace, as reported by the Leicester Mercury.
A national trust designed to support cancer-stricken children requested the actual Queen Elizabeth II -- who couldn't work it into her schedule.
So Mirren stepped forward to invite him to the Gielgud Theatre to see her play the Queen -- and invited him backstage to share tea and cake and to meet the corgis who star in the play with her. There were even footmen.And naturally, she was in costume the entire time.
"Our incredibly brave Ollie has Tea with The Queen!" the National/Regional Children's Tumor Leukaemia and Cancer Trust posted on their page.
His mother Catherine told the Mercury, "Dame Helen was brilliant. She stayed in character the whole time and spent a lot of time talking to Oliver and drawing him out of himself. She signed his British flag, which he waves all the time."
She also knighted him, with her hand. Now, that's royal behavior.
Posted by DSD at 2:43 PM