disability living allowance for Arthur and not for Alfie 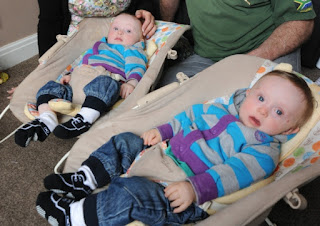 from the Lancashire Evening Post:
The 10-months-old brothers, who have identical medical problems and need the same round-the-clock care, became instant TV and newspaper stars after their plight was featured in yesterday’s LEP.
Yet despite all the press attention, officials at the Department of Work and Pensions were showing no signs of budging over their payment of disability living allowance for Arthur and not for Alfie.
“We haven’t heard a word from them yet,” said dad David. “They must know this case is ridiculous. All we are asking for is a bit of fairness.”
The national media descended on the Banks-Lowe household when the story of the twins’ case hit the newstands near their home in Wesham near Kirkham.
David admitted: “I had to come home from work in the afternoon because there were so many press here knocking on the door.
“It has gone totally crazy. The story on Facebook had something like 51,000 shares within a matter of hours.
“The benefits issue is quite a hot one at the moment with all the rejigging that has been going on. And then a ridiculous case like this comes along and it obviously caught the media’s attention.
“No-one we have spoken to can quite believe what has happened with Arthur and Alfie.”
The boys were born one minute apart and have exactly the same medical issues and care needs. They have daily physio sessions, attend hospitals and clinics regularly for heart, lung and eye problems and their breathing has to be monitored during the night.
Yet one officer at the benefits department at Warbreck House in Blackpool judged Alfie did not need any more care than other children of his age. Meanwhile an identical application for his twin Arthur was granted without question.
“It’s worrying for other people applying for this allowance because it shouldn’t be a lottery who you get to deal with your case.”
A spokesman for the disabled charity Scope said: “Parents tell us they have to fight battle after battle to get the right support for their children. But this is one of the worst examples we’ve heard.
“Everyday life costs more if you’ve got a disabled child. In the current climate that makes disability living allowance a real life-line.
“How can it be right that of two identical twins living in the same household, one is eligible for DLA and the other is not? This suggests that the system is a complete lottery, which depends on who is assessing your application.”
Posted by DSD at 11:23 AM