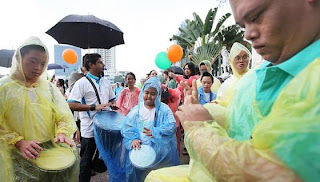 from the Straits Times:

The Singapore River will be transformed into a sea of green once again as the annual St Patrick's Day celebrations return - and bigger than ever before. This year, St Patrick's Day Street Festival will go on for three days instead of just one, and it will not just be the merrymakers in green - the OCBC Centre will be lit up with shamrocks for the entire weekend.

Organised by Singapore River One, the festivities begin on March 15 and will culminate in the St Patrick's Day Parade at 3pm on March 17. The celebrations join some of the world’s most famous landmarks and sites that will go ‘green’ on St Patrick’s Day (March 17) under Ireland’s annual “global greening” initiative, including the Christ the Redeemer statue in Brazil and the Pyramids of Giza and the Sphinx in Egypt.
Throughout the weekend, the public will also be treated to performances by Irish bands, the Irish Inspirational Dancers troupe, an International Street Fair, street artists that including face-painters and balloonists, and Irish Walking Tours that trace the shared history between Ireland and Singapore.

There will be Irish food and drink promotions, as well as a lucky draw, running at participating Boat Quay restaurants and bars on all three days.

The parade will start at Old Parliament House and proceed along the Singapore River, before ending on Circular Road, where a massive post-party will take place. Prizes await the best dressed among Parade participants.

Ambassador of Ireland to Singapore, Mr Joe Hayes, is the festival’s honorary patron. Senior Minister of State for Education and Law Ms Indranee Rajah, and Irish Government Minister Brendan Howlin will be the guests of honour at the March 17 St Patrick’s Day Parade, jointly celebrated with World Down Syndrome Day.

This is the second year running that the St Patrick’s Day Festival and the Parade form the backdrop for World Down Syndrome Day (WDSD) celebrations organised by the Down Syndrome Association (Singapore). Its members, along with their families and friends, will march in the March 17 parade. Its dancers and drummers will perform throughout the festival.
Posted by DSD at 5:00 AM