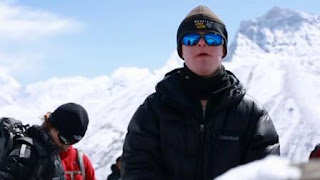 A 15-year-old boy with a passion for sports and an infectious smile became the first person with Down syndrome to stand at the base camp of Mount Everest, and returned to Southern California Friday night to a jubilant welcome.

Elisha "Eli" Reimer landed at Los Angeles International Airport Friday night after making the 70-mile trek, which was more than a goal – it’s what Eli’s father calls the family’s mission.
Bundled up against the frigid temperatures, Eli, his father and six others made the journey to benefit the Elisha Foundation, based in Oregon.
Named for the high school freshman who made the 17,600-foot climb, the Elisha Foundation was started in 2005 as a way to give families of children with disabilities "practical and emotional support" through free retreat programs, fully funded by donations.
The organization also raises awareness and money for orphans with disabilities.
And instead of seeing his son's Down syndrome as a disability, Justin Reimer calls it his "uniqueness." The Elisha Foundation seeks to impart that compassion in communities where Down syndrone causes families to be marginalized.
Dozens of well-wishers are expected to greet Eli and his hiking crew at LAX Friday night with balloons, signs and cheers.
"We will be screaming our heads off to welcome home Team Eli," wrote Kristen Isaacs, with the Eli Foundation.
The trek has generated $85,000 in donations so far. Their goal is $100,000.
Posted by DSD at 2:52 PM