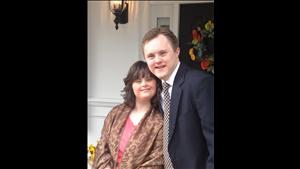 by Emily Stroud from WBIR NBC 10:
In the United States, more than 400,000 people live with Down syndrome.
For the first time The United Nations is recognizing "World Down Syndrome Day" March 21st.
Every day, the University of Tennessee recognizes and encourages the potential of people with Down syndrome.


One young man is making the most of an innovative program at UT.
Chad Mitchell really enjoys his internship as a manager with the Lady Vols.
He likes hanging out with his girlfriend.
"When I first met her last year I knew she was the one so," Chad Mitchell said. "I dropped down on one knee and I asked her to be my girlfriend. And what did she say? She said yes."
He loves taking classes at the University of Tennessee. He's part of the FUTURE program for students with intellectual disabilities.
"The FUTURE program is a two year certificate program in which the primary goals are career and independence, just like every other college student here at the University of Tennessee," David Cihak said.
University of Tennessee Associate Professor David Cihak explained that Chad and his fellow students audit courses

, have work-based internships, and take classes in practical career skills and life skills.
"And they also participate in all the other activities here on campus whether it be going to the games, participating in the museums, going to the theaters, working with the volunteers who work with our FUTURE students," Cihak said.
Chad said, "I hang out with my friends."
An especially good friend is his little sister Caroline.
"Joy. True genuine joy. That's what he brings me in my life and so many other people," Caroline Mitchell said.
In age, they are five years apart. In distance, they go to college three hours apart. But Chad and Caroline continue to be close
"Chad and I were best friends growing up and we still are," Caroline said.
She started at Belmont University in Nashville the same semester Chad started college in Knoxville.
"Chad is experiencing so many things just like I am in college and I think that's so wonderful about the FUTURE program is they're treating him just like any other college student," she said.
Chad said, "I'm taking a conditioning class and a sports management class as well."
He is a sports fan who channels that enthusiasm and focus into his studies, where he is finding success.
"Learning how to be more independent and try to live on my own," he said. "I'm a hard worker and I do whatever my professors want me to do I do with pride."
Caroline said, "We've just seen him blossom in so may different ways. Academically and socially, especially socially, just how he has gained confidence."
Chad will graduate from the UT FUTURE program in May.
"I'm pumped!" he said.
So what letter grade should the FUTURE program earn?
"I'll say definitely an A," David Cihak said.
Caroline said, "A++."
The future of the FUTURE program is a little flexible.
"We're learning a lot too because this is a new program and we're all just trying to figure out how can we really maximize its potential," Cihak said.
As for the future of the brother and sister after college....
"I hope that I find a job and start a family and I hope Chad can find a job and have a family too," Caroline said.
Chad said, "I don't know what I am going to do after I graduate. I'm just waiting for God to open up doors to see what He has in store for me."
Posted by DSD at 12:15 PM