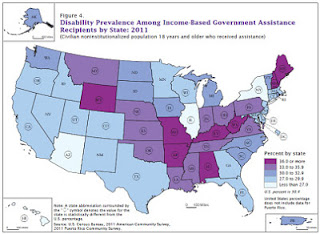 from theUnited States Census Bureau:
Among the 46.0 million adults who received income-based government assistance in 2011, 30.4 percent of them had a disability, according to a report released today from the U.S. Census Bureau.
The report, Disability Characteristics of Income-Based Government Assistance Recipients in the United States: 2011, offers information about the occurrence of disabilities among people 18 and older who received income-based government assistance. The information is based on data from the 2011 American Community Survey.
"On average, people with disabilities have lower employment and earnings; therefore, understanding what assistance people with disabilities receive may help governments better coordinate and administer their programs," said Bernice Boursiquot, a Census Bureau statistician and co-author of the report.
People with a disability include those having vision, hearing, cognitive, ambulatory, self-care or independent living difficulties. Among recipients of public assistance, 18.2 percent had difficulty walking or climbing stairs, 14.6 percent had trouble leaving home to go shopping or visit the doctor without assistance, and 14.2 percent encountered trouble with memory, concentration, or making decisions.
Recipients received assistance in three forms: cash assistance (cash or money income), in-kind assistance (services, goods or vouchers) or both cash and in-kind assistance. Among people who received both cash and in-kind assistance, 58.3 percent had a disability. Among recipients of only cash assistance, 33.2 percent had a disability. Recipients of only in-kind benefits had the lowest disability rate at 22.6 percent.
This report also found that 22 states had disability rates above the national estimate of  30.4 percent among those receiving assistance. In comparison, 15 states had rates below the national estimate.
States west of the Appalachian Mountains had higher rates of disability among recipients of income-based assistance. In comparison, states in the Southwest and along the Eastern Seaboard had lower rates.
West Virginia, Kentucky and Arkansas were three of the top five states for disability prevalence in the total population, as well as in the total population receiving government assistance. In West Virginia, 26.8 percent of people with disabilities reported having ambulatory difficulty, defined as severe difficulties walking or climbing stairs.

The American Community Survey provides a wide range of important statistics about people and housing for every community across the nation. The results are used by everyone from town and city planners to retailers and homebuilders. The survey is the only source of local estimates for most of the 40 topics it covers, such as education, occupation, language, and ancestry and housing costs for even the smallest communities. Ever since Thomas Jefferson directed the first census in 1790, the census has collected detailed characteristics about our nation's people. Questions about jobs and the economy were added 20 years later under James Madison, who said such information would allow Congress to "adapt the public measures to the particular circumstances of the community," and over the decades allow America "an opportunity of marking the progress of the society."
Posted by DSD at 5:00 AM