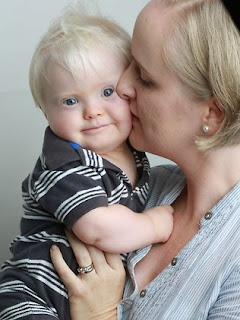 by Leisa Scott from The Courier Mail:
IT RAINED the day they got the news. Big, pelting drops, as if some screenwriter well-versed in melodrama was dictating the scene.
Annie Love couldn't take the call. She'd been going "slowly nuts" waiting for diagnosis day to arrive and was only just holding herself together. Her husband, Ben, answered the phone. He nodded. Then he mouthed the words. "It's positive. Baby has Downs."
They cried. Huge, heaving sobs to rival the rain. In the days and weeks that followed, they'd pull themselves together, then lose it all over again. And they grieved. This was not the picture they had of their family. This baby was meant to be "normal" just like Sam, then 4, and Charlie, then 2. Now the picture had changed, fuelled by stereotypes: an overweight kid with a bad haircut being teased, a life on the fringes.
But they'd already decided after many heart-wrenching talks in the preceding four weeks between suspicious scan and confirming amniocentesis that they would have the baby. If he had Down syndrome, they'd paint a new picture.
So they prepared. Months of grief gave way to a readiness and a joy. Everyone close to them knew their baby would be born with Down syndrome. Now it was time to get on with it. They wrote a birth plan. No-one in that delivery room was to be negative. This was their baby and they were happy. He arrived at 2.55am on March 20, 2012. Nicholas Fenton Angus Love, 3.8kg, 52cm long.
And here he sits on the floor right now, goo-gah-gurgling as he plays with his toy with gusto. Plump, healthy, with a knockout grin. And "chromosomally enhanced", as his mother likes to say.
As she looks at Nicholas playing at their home in Gordon Park, on Brisbane's northside, it's hard for Annie, a Catholic, to admit she considered abortion. So did Ben. "From a relationship perspective it was probably one of the hardest things we've ever had to go through," says Annie.
That the Loves decided to have Nicholas after the amniocentesis confirmed Down syndrome makes them a rarity. Most don't. Only 5.3 per cent of pregnancies where there is a prenatal diagnosis of Down syndrome are continued. This figure comes from a respected Victorian study, the only (now-defunct) research in Australia that followed the link from prenatal diagnosis to live births of babies with Down syndrome. Released in 2008 and based on figures from 1986 to 2004, the study was co-authored by associate professor Jane Halliday, a public health genetics expert with Melbourne-based Murdoch Childrens Research Institute. "The vast majority, 95 per cent, were terminated," she says.
It's similar across the Western world. About 90 per cent of foetuses with a diagnosis of Down syndrome are terminated in New Zealand, about 92 per cent in the US, about 93 per cent in the UK.
Now, a new element in the vexed issue of Down syndrome and reproductive choice is entering the fray. From this year, non-invasive prenatal testing is available in Australia. The existing invasive methods of diagnosis amniocentesis and chorionic villus sampling (CVS) are taken up by about 6 per cent of pregnant women, generally after an abnormal scan. They carry the risk of miscarriage the main reason women do not seek the test. But the new tests, although expensive and, for now, limited to the wealthy at a cost of up to $2000, do not pose such risks.
Which raises the very real question: Is this the beginning of the end for Down syndrome? 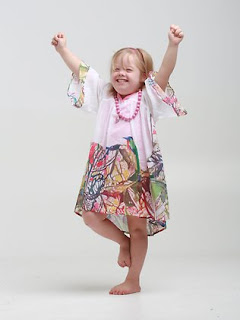 THE refrains of "I'm A Little Teapot" Coming from Brodie Logan's iPad are starting to get a bit too loud.
Mum Angela suggests the five-year-old turn it down. Brodie shoots her a look as if to say 'Party pooper!' and keeps the volume where it is. On the second request, Brodie considers her options and turns it down. Yep, just like most five-year-olds.
Angela smiles at her daughter's chutzpah and continues reeling off Brodie's achievements. "She's writing her own name. She can count well into her teens. She loves to learn, she loves to be with other kids and be involved and play. She packs her lunch (for a mainstream school), wants to help cook dinner. She's independent, fiercely so."
That's not the picture that was painted for Angela and husband Ben, of Ipswich, when Brodie - their first, followed by Harvey, 3, and Sammie, 18 months - was born with Down syndrome. Angela says while the medical care at a major Brisbane hospital was top-class (Brodie needed a heart operation at 11 weeks), she was shocked by the "overwhelmingly negative" advice from medical staff and social workers about life with Down syndrome.