UP Festival benefits Down syndrome community 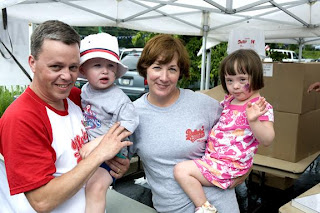 from the Delaware County News Network:

When Cholly and Kas Kenney started a rock band fund-raiser called DufferFest in 2007, their daughter Kara was a toddler. Today, Kara is a first-grader at Garrettford Elementary School in Drexel Hill and DufferFest has mushroomed into a major event now called Rock for CHOP and the UP Festival.The 2012 family-oriented festival starts at noon Saturday, June 2, and runs all day, featuring live bands, refreshments and family fun at Duffer’s Tavern, 192 Middletown Road (Route 352), Glen Mills. Rain date is Sunday, June 3.This year’s event features several live bands, children’s entertainers, a moon bounce, giant slide, dunk tank, carnival games and more.As a special treat this year, the entertainment will begin at 1 p.m. with a performance of the Media Theater State Street Miracles, a performance troupe of young adults with intellectual disabilities, including several who have Down syndrome.In an effort to show “inclusion” in action, the State Street Miracles will also perform a song with the next band, The Northern Rednecks. The Miracles and the Rednecks will share the stage shortly after 1 p.m., after the Miracles perform some of their own numbers. Kara Kenney will also join the performers.They will team UP for a rendition of the Journey song, “Don’t Stop Believin.”“This is a great example of what we are all about, people with Down syndrome being included in every aspect of the community, from schools and jobs to music and entertainment,” Cholly said. “The Miracles are wonderful ambassadors for people with Down syndrome and intellectual disabilities. They are talented, professional and their enthusiasm is contagious.”Since the first DufferFest in 2007, Cholly and Kas Kenney and their friends, family and co-workers have raised over $100,000 for the Children’s Hospital of Philadelphia Trisomy 21 program.“My wife Kas and I welcomed Kara into our family in August 2004. She was diagnosed with Down syndrome a few months before birth and we enrolled our family in the Trisomy 21 program at CHOP right away,” Cholly said. “When Kara arrived, everything was in place for her to receive the care she needed from doctors dedicated to caring for individuals with Down syndrome.”In 2007, Cholly and Michael Slachta, co-owner of Duffer’s Tavern, launched DufferFest, a live band event that took place in 2007, 2008 and 2009, raising $80,000 for CHOP.In 2010, they expanded the event and held Rock for CHOP and the UP Festival at Citizen’s Bank Park. That event brought in $12,000.“This year, we are pleased to be back at Duffer’s and we hope everyone comes out and enjoys the fun while raising awareness about Down syndrome, and raising funds for the Trisomy 21 program that helps so many families.”The State Street Miracles will open the entertainment at 1 p.m. The featured bands are The Northern Rednecks, Loaded, 52 Pick Up and Keystone.Outdoor activities run noon-6 p.m. and indoors from 6 p.m. until closing.“If we can make some more money for this program, it is going to give another child and their family the care and education they need. Maybe we can shorten the waiting list,” Cholly said.He said Kara is doing well in school where her favorite subjects are art and music. She also has a younger brother, Christopher, 5.Cholly and Kas are joined in their efforts by Brendon and Kristin Murphy, whose son Evan has Down syndrome, and Kristen’s brother, Geoff Lyman.
Posted by Rick at 8:00 AM