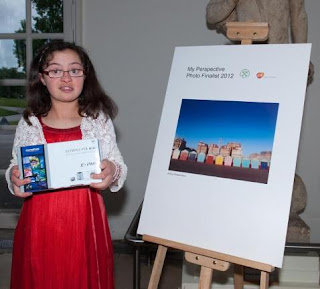 from the Haringey Independent:
A 12-year-old girl with Down syndrome has won a photography competition.
Victoria Campos-Davis from Cranbourne Road in Muswell Hill won the My Perspective Photographic Award in a competition organised by the Down Syndrome Association.
Victoria, who attends Alexandra Park School, won the competition with a photograph she took of Brighton’s beach huts in November 2011.
As winner she received an Olympus camera worth £400.
Maria de Fatima Campos, Victoria’s mother, said: “Victoria was very, very excited. She loves taking lots of photos when she sees beautiful things.

“I think she takes after her parents; we are both photographers.”
The winners were announced at a reception in The Orangery at Kew Gardens yesterday evening.
Posted by Rick at 8:00 AM

Email ThisBlogThis!Share to TwitterShare to FacebookShare to Pinterest
Labels: competition, Down syndrome, photograpy, self advocate