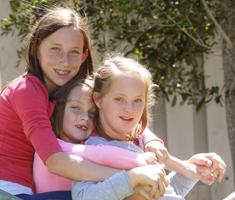 By Andrew Ford, Florida Today:
Emily Foster sings. She plays softball. She hangs out with her sisters, she doesn't get scared on the big rides at the fair, and she likes science class best of all. And like most other 10-year-olds, she has a dream.
Hers is to be famous.
She also has Down syndrome.
When she told her father, Russ Foster, that one day thousands of people would scream her name, he decided to help her reach her goal — or, he figured, as close as they could get. The Melbourne, Fla., dad started a Facebook page for what he calls the Emily Foster "famous" project. He's already got more than 1,000 friends and acquaintances to "like" it.
Russ isn't really expecting fame in the form of thousands of people screaming Emily's name. Instead, he's measuring success based on the number of new people and experiences he can introduce Emily to, and, to a lesser degree, the number of famous people she can meet.
"It's just a dad trying to make his daughter's dream come true," said Russ, who has three other daughters. "I want her to be seen like any other kid, and I guess me creating the project is a way to level that field."
Emily's mother, Amber, initially was wary. She feared people might be mean to Emily.
"It would hurt my heart," Amber said. Thankfully, she said, that hasn't happened.
To be a singer
When Russ first envisioned the Emily Foster "famous" project back in January, Emily noted several activities or achievements for which she could succeed — ballet, medicine, fashion design, zoo keeping, firefighting, and shark hunting, to name a few. But most often she said that she'd like to be a famous singer.
Emily likes to play CDs on a boom box in the bedroom she shares with her 5-year-old sister, Averi. Her favorite artist is Taylor Swift; her favorite song is Swift's "Never Grow Up." Emily strums on a small pink guitar and sings along, working to overcome her speech impediment.
Russ said that chances are slim that Emily will become a famous singer.
"Unless there's some miracle, people aren't going to buy tickets to her concert," Russ said. "My dream would be for her to introduce Taylor Swift at a concert."
Russ managed to make contact with Swift's agent. He said they may be able to arrange something the next time Swift is in the area.
Russ persuaded figures such as actor John Travolta, U.S. Senator Bill Nelson and Dick LeBeau, a Hall of Fame defensive back and football coach, to send Emily autographed photos. She got a part in a local music video. She met the Harlem Globetrotters.
"I didn't realize until later that it was kind of a unique endeavor," Russ said of the project.
"Any time a child, whether or not they have Down syndrome, when they express a dream, parents should be encouraging of that," said Amy Van Bergen, executive director for the Down Syndrome Association of Central Florida.
"There are people with Down syndrome who are famous, who are well-known," Van Bergen adding, citing Lauren Potter, an actress with Down syndrome best known for her role as Becky Jackson on the popular show "Glee."
Of course, the chances of any child becoming famous are slim.
"I don't think (Emily's) chances are any less than a typical child who doesn't have Down syndrome," Van Bergen said.
Emily and her twin, Megan, were born at 33 weeks, rather than the usual 40.
Russ and Amber said they had never thought much about Down syndrome before they had Emily. After, they worried about the possible health impacts.
"I remember sitting and bartering with God," Amber said. "I'm going to care for this child like my other ones. Don't take her away from me."
That's what Russ and Amber say they have tried to do, raise Emily the same as their three other daughters: Megan (Emily's twin), Averi, 5, and Miranda, 16.
Russ said it was helpful that Emily had a twin without a disability; it gave them a benchmark to measure Emily's development. Both girls had attended Manatee Elementary School, but the family decided to withdraw them when they felt that Emily was being unfairly separated from the general education setting.
Emily has responsibilities at home and she is punished if she misbehaves, just like her sisters.
"We treat her like the other kids in the household," Russ said. "She doesn't get any special treatment."
"It's amazing what she does with the barriers others place in front of her."
Posted by Rick at 10:45 AM