Summer camp gives those with Down syndrome a chance to dance 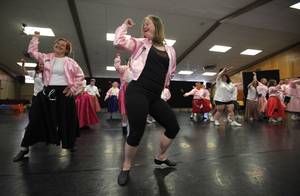 from News OK by Ben Luschen:
It was Caleb McFarland’s time to shine.
McFarland has attended the Dance and Down syndrome Music Theatre Camp, held annually at the University of Central Oklahoma, multiple times in the past, but now all eyes were on him.

For the camp’s final performance on June 15, the dancers performed selections from “Grease.” McFarland was the featured performer in “Greased Lightning,” the show’s climax.
Apparently, learning the dance moves made famous by John Travolta was not as hard as it looks.
“It usually takes 30 minutes,” McFarland said. “For me it takes two. The dance is simple.”
Still, chance favors the prepared, so McFarland worked tirelessly throughout the camp to perfect his choreography.
“It was 24/7, four days,” he said. “I practiced a lot.”
The Dance and Down syndrome Camp, which this year served youths as young as 13 to adults as old as 36, is a weeklong day camp held every summer to give individuals with Down syndrome a chance to participate in a theatrical production. The dancers spend the first four days of the camp rehearsing for their final musical showcase on Friday.
The theme of this year’s performance was “Grease,” but past themes have included Disney Channel’s “Camp Rock,” and the “High School Musical” trilogy.
Robyn Pasternack, an assistant professor of ballet at UCO, started the camp five years ago. Her daughter, Haley, has Down syndrome. This was the first year she was old enough to participate in the camp.
Pasternack originally started the camp with her daughter in mind.
“I wanted to know what was in store for my daughter when she gets older,” Pasternack said.
“That’s what really struck me. Here she was 5 or 6 years old and I didn’t really know what the future was going to be for her.”

After five years of teaching dance at her camp, Pasternack says she’s seen the great amount of potential that those with Down syndrome have, both as performers and as people.
Many of this year’s campers had been involved in past versions of the camp. Merradyth McCallister, the camp’s behavior specialist and mother of one of the campers, has seen the camp progress.
“They’ve gotten so much better every year working at their abilities,” McCallister said. “I mean, it helps them build up so much confidence that it leaks out into the other activities that they do.”
Tyler Sorum, a psychology student at UCO who works at the camp as a movement specialist, says he is amazed by the progress the performers have made in just the week they were at the camp.
“When we first started,” Sorum said, “listening to them sing was kind of a scary situation, but they definitely have proved to me that they have a range of voice. It’s interesting to see all the different kids and the different aspects to them.”
After this year’s performance, which also included the songs “Summer Nights” and “We Go Together,” the audience begged for an encore. The dancers, of course, obliged.
Kathryn Taylor, who played Rizzo in the musical, says “Grease” ranks among the better performances the camp has ever held.
“I mean, I’ve been coming here for five years,” Taylor said. “It was great.”
Though many of the campers had shined individually, McFarland says the credit for the day should go to everyone who participated in the event.
“This experience is about being all together,” McFarland said.
Posted by Rick at 7:00 AM