A fight to make friends 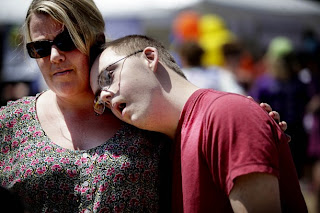 By Molly A.K. Connors from the Concord Monitor:
For the last 10 years, it's been easy enough for Susan Zimmermann's son, Oliver, to play with kids his age, even if they don't have Down syndrome like he does.
But in two years Oliver will be in middle school. By then, Zimmermann said, Oliver's condition will make it a little harder for him to keep up with his peers. There's the risk he could become lonesome and socially isolated.
"It's sad, but it's what happens," Zimmermann said in an interview yesterday.
She wanted to get Oliver involved in Best Buddies, a charitable nonprofit that pairs intellectually and developmentally disabled people with peers who have similar interests.
But New Hampshire doesn't have a statewide Best Buddies program - there are three chapters, but their presence is limited and the volunteers depend on staffers in Massachusetts.
So about a year ago, Zimmermann and her friend Sarra Dennehy, whose son is also 10, has Down syndrome and attends Concord schools, decided to start one.
They formed a board of directors and set out to raise $250,000, the amount Best Buddies International requires to establish a state office staffed with a director and program managers. Those people, in turn, bring Best Buddies chapters to schools across the state.
Yesterday, about 400 people showed up to help them at the inaugural New Hampshire Best Buddies Friendship Walk, a one-mile loop from the State House through downtown Concord. After the walk, advocates danced to live music, ate barbecue and played with Darcy, a Shetland pony who came from New Boston for the event.
Established by Anthony Shriver in 1989, Best Buddies is a 501(c)(3) nonprofit that works with nearly 700,000 people with and without disabilities worldwide.
The organization doesn't ask its participants to identify their disability, but one in six children in the United States is diagnosed with a developmental disability, which ranges from mild speech disorders to cerebral palsy and autism, according to recent data from the Centers for Disease Control and Prevention.
Peter Fleming, 47, of Manchester is one of the many people who said he's looking forward to finding a buddy in New Hampshire.
Fleming said he's already very busy working his job bagging groceries at Stop and Shop and volunteering with the Manchester Lions Club and the governor's commission on disabilities, but he agreed to be on the board of directors of Best Buddies New Hampshire.
Fleming is already part of "e-Buddies," an email pen pal program through Best Buddies International. Several years ago, he just happened to be paired up with Tim Shriver, the CEO of the Special Olympics and son of Eunice Kennedy Shriver.
At least once a week, Fleming said, he and Shriver exchange emails.
"We talk about the Red Sox; we talk about our families," Fleming said. "He's a big Red Sox fan."
Fleming said he got to meet Shriver in Washington, D.C., a few months back and would like a companion closer by, too.
"We can do stuff together," he said.
Taryn Seybold, a 36-year-old emergency room nurse, wants her son Nicholas, 16, to have a buddy, too. He's had a wonderful experience so far with Concord High School's peer-to-peer program, which pairs "typical" students with intellectually and developmentally disabled ones, Seybold said.
But she worries what will happen after Nicholas turns 21 and won't be able to go to school anymore. He has the same dreams as any other teenager, she said: get married, have a family.
She wants him to have a fulfilled life and not have to depend on her for all of his needs.
"Just like any kid, he doesn't want his mom hanging out all the time," Seybold said, walking up South State Street.
Nicholas followed closely behind, arm-in-arm with one of his three "typical" friends from the high school.
Nicholas's friends, who graduated Saturday, said they would volunteer with Best Buddies once it launched in New Hampshire. Sitting in the shade after the walk, they said it's possible they've benefited from the relationship more than Nicholas has.
"He's one of the nicest people I've ever met," Mckenzie Dow, 17, said, right before Nicholas grabbed a Monitor reporter's hand, kissed it and asked for it in marriage.
He uses that line a lot, they said.
Organizers said they've raised $40,000 toward their goal of $250,000. They estimate they raised at least $35,000 yesterday.
A statewide chapter can't come soon enough for Sarra Dennehy, who said it's becoming harder for her son, Liam, who has Down syndrome, to keep up with children in their neighborhood. The kids are kind, she said, but they've gotten bigger and faster and stronger, and Liam just can't hold his own.
"Liam watches all the kids in the neighborhood play," she said. "And it sucks."
If you slow down long enough to let him in your life, she said, you'll be better for it.
"It really opens your eyes to the heart and the soul of people instead of just the exterior," she said.
Posted by Rick at 11:57 AM