Dad becomes Ironman for son, orphans with Down syndrome 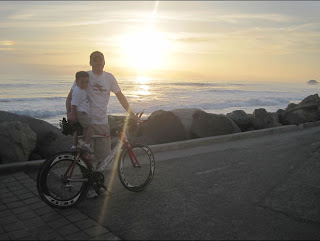 from KSL.com by Stephanie Grimes:
One of the greatest blessings in Brady Murray's life is having a son with Down syndrome.
It was his 4-year-old son, Nash, who inspired him to tackle the stereotypes surrounding Down syndrome and the challenges faced by those trying to adopt the children.
"Down syndrome in society in most cases is seen as a negative," Murray said. "But these are very special children. They light up a room, and they do things that others aren't able to do. They're able to help individuals feel unconditional love in a way I've never seen other people be able to do."
And some of the worst off of these children — those sent to orphanages shortly after birth due to the condition — are often found in eastern Europe, where they spend their first five to six years in an orphanage before being sent to spend the remainder of their lives in an adult mental institution.
Adoption costs for these children can be upwards of $30,000, unattainable for many who hope to be parents. And that is where Racing for Orphans with Down syndrome comes in.
Murray started the organization after looking at Reece's Rainbow, an organization dedicated to
finding homes for orphaned children with Down syndrome. Murray learned in November that what was stopping the children from finding a home was not a lack of interested adoptive parents, but rather, a lack of funding.
"I said, ‘If money is the only thing keeping these kids from being adopted, we can do something about that,'" Murray said.
He and his wife, Andrea, started off simply. They donated to Reece's Rainbow that year for Christmas instead of buying gifts for friends and family. They told their story at family gatherings and to their friends who had children with Down syndrome. Gradually, the money came in, but Murray said it was a miracle at Christmastime that really got things started.


The Ironman was a challenge — perhaps one of the hardest he had faced — but Murray said it was well worth it, partly because of the opportunities it created.
This year, the Ironman World Championship decided to hold a contest that will allow eight people the chance to compete in the event without qualifying. Hopefuls had to enter a short video showing what inspired them to compete, and Murray chose to highlight RODS Racing. He hopes by competing, he will raise more awareness for the cause.
"I firmly believe that when an individual hears the story, if it's supposed to be, then in their heart of hearts they know they want to help," he said. "So it's simply a matter of creating awareness." Murray hopes others can come to see Down syndrome as he sees it: a blessing that allows people to learn to love and accept others.
"Having Nash has allowed me to see people how we should see them: as people, as children of God," he said. "And to recognize that every single person is very, very special, and that every person has talents and abilities, and has potential."
"Regardless of their background, education or perceived disabilities, they have a divine potential," he continued. "I didn't know that before I had Nash, and that's something he has taught me."
Doug Brasher, at Brasher's Auto Auction, knows Murray and what he was trying to do. So for the company's annual Christmas car auction — the proceeds from which go to charity — Brasher decided to donate the proceeds to Reece's Rainbow to help fund the adoption of a child named Eli, whom the Murrays had chosen as the first child they would help.
"The first dealer bought it, then he donated it back," Murray said. "Then another dealer bought it, and donated it back. This happened eight times. In the end, $13,000 was generated."
Very quickly, the $13,000 in Eli's account became $20,000, and Murray began to think about how else he could raise money for the children on Reece's Rainbow. He had been thinking about participating in an Ironman triathlon for some time, and decided it would be the perfect opportunity to raise awareness for his cause.
"All of those fears and anxieties and doubts for me, thinking whether or not I could do a full Ironman went out the door," he said. "I was going to do it for these kids."
He signed up for the St. George Ironman, at which point he founded Racing for Orphans with Down syndrome, or RODS Racing. The organization focuses on finding funding for one child at a time, raising enough money — usually $15,000-$20,000 — to cover the majority of adoption costs.
Posted by Rick at 7:00 AM