Football and Cheer Camp with the Denver Broncos 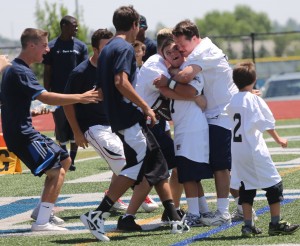 from Our Colorado News by Ryan Boldrey:
All the excitement surrounding the Broncos this offseason no doubt has to do with Peyton Manning.
Yet another longtime veteran of the game, Jack Del Rio, is already making a difference in his new community. The squad’s new defensive coordinator, along with the recently retired all-pro Brian Dawkins, spent the morning of June 23 coaching a pair of teams comprised of children with Down syndrome to an 18-18 tie at Valor Christian High School in Highlands Ranch.The third annual event at Valor was once again organized by former Broncos standout Ed McCaffrey, whose sons Christian and Max both starred on the gridiron this past year for the Eagles. The three-time Super Bowl champion receiver teamed up with the Global Down Syndrome Foundation for the event, giving those with the disorder a chance to shine and have some fun.
The game is the pinnacle of a two-day camp to give those with Down syndrome an opportunity to learn and play the game of football, while working with the former Broncos and a state-championship high school football team.
“Ed (McCaffrey) and I got together and we gave the (kids) a buddy that would be with them every day, take them through it, and get a good close relationship,” said Valor head coach Brent Vieselmeyer, who has watched the program grow each year. “Their buddy would help them out, get them lined up and then they would play.
“It was a great opportunity for our kids from just a Valor perspective of we really get to see kids being unselfish. You hear so many terrible things about this generation and here you’ve got kids that are trying to be something more than just themselves. It’s a pretty neat experience. It’s a blessing for them and frankly, for our team it’s the most fun they have, this event, all summer.”
The day featured everything from skydivers to the Denver Broncos cheerleaders, mascots Thunder and Miles, the Mile High Tumblers and Drumline and a celebration party afterward that featured a bouncy house, face painting and more.
“Coming out here, having these games, and just playing football period it makes their day every time they come out here,” said Gabriel Watkins, one of the buddies and a Valor sophomore who plays both linebacker and fullback for the Eagles. “It’s a lot of energy and a lot of work, but it’s great to see them happy.
“It feels good on the inside to let you know not only is our school getting things done like we said we would, but that I did something to help, and now I feel good because I actually did something positive not just for myself but for countless other kids.”
Not just for boys and young men, the Broncos cheerleaders also put on a halftime show with some young cheerleaders who have Down syndrome.
“While we held just a couple practices before the camp, the cheerleaders worked with the girls for over a month,” Vieselmeyer said.
Posted by Rick at 3:00 PM