Boy with Down syndrome uses iPad to help him communicate 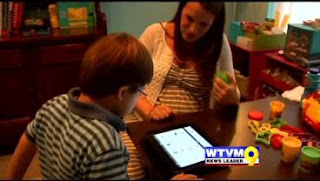 by Courtney Smith from WTVM 9:
AUBURN, AL (WTVM) -
Like many best friends, 7-year-old Hal Bradshaw and Sophie Snyder don't need a lot of words, their bond is rock solid.
Hal has Down syndrome. He began signing as a baby, but verbal words remain a challenge.
"You want the best for your children, you want them to be able to output to the world, not just input," said Hal's mom Samantha Bradshaw.
WTVM.com-Columbus, GA News Weather
Hal began lessons with Kelly Cadden, a speech pathologist at All for Children in Auburn. His family bought an expensive language output device, but it was complicated and Hal didn't like it.
"We knew how much he loved playing games on the iPad, and so we started using it as a way of communication and he liked it and picked it up immediately," said Cadden. "He likes to carry it with him, doesn't like others to touch it, it is his voice, one he didn't have before."
Using picture icons Hal taps the screen to create simple sentences, expressing his needs and wants.
"We are hoping over time he will start to imitate it, and will spontaneously utter the phrases clearly instead of having to use the device," said Cadden.
"You put the iPad in front of him and it is amazing what is inside his brain, and I was like, I knew he knew, I knew it, he just can't get it out," said Bradshaw.
Hal completed Kindergarten in Auburn this year. His teachers are totally on board with his iPad speaker: technology allowed Hal to join in and fit in.
"The iPad is cool and the kids were like, awesome he's allowed to have one at school, so it also helps with socially acceptable in that area as well," said Bradshaw.
While they have an unspoken bond, it's nice to be able to tell your friend how you are feeling.
"It's good to hear him communicate so well and he understands," said Sophie Snyder, Hal's best friend.
Posted by DSD at 6:00 AM