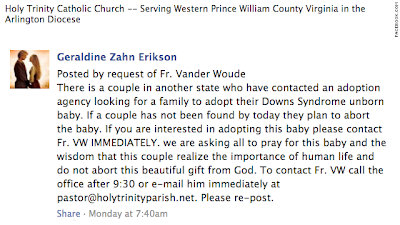 by Daniel Burke from CNN:
(CNN) – On Monday morning, a Catholic parish in Virginia posted an urgent message from its priest on Facebook.
A couple was pregnant with a child diagnosed with Down syndrome, said the Rev. Thomas Vander Woude of Holy Trinity Catholic Church in Gainesville, Virginia.
If they didn't find a couple willing to adopt the unborn child by the end of day, they would abort it, according to the priest.
Within hours, hundreds of couples had contacted the church with adoption offers, according to Holy Trinity staffers.
The parish had to bring in extra staff to field the phone calls flooding in from around the world, including the Netherlands, Puerto Rico and Canada, said Martha Drennan, the parish's director of Adult Faith Formation & Liturgy.
In addition, Vander Woude received upwards of 600 e-mails, Drennan said. "It has to be well over 1,000 couples who were interested in adopting the baby," she said.
"It's really beautiful," said Vander Woude. "Here you have this unborn babe with handicaps and all these people almost immediately offer to take care of it. It's just really a testament to the goodness of people."
On Tuesday, a local adoption agency presented three prospective families to the pregnant couple. Drennan said the church is not disclosing the name of the adoption agency, which screened prospective adopters, to protect the biological parents' privacy.
"It was so exciting to see all those people stepping up to give that baby a voice - a life," said Geraldine Erikson, a member of Holy Trinity who posted Vander Woude's urgent message on the church's Facebook page.
Erikson, who manages the church's social media accounts, also said she sent an e-mail blast to 140 families on a Yahoo discussion board for homeschooling families
Dozens of Catholic Facebook groups, as well as international media, have jumped on the story.
"I was doing a search this morning and saw some articles in languages I don't understand," Erikson said.
The Catholic Church teaches that all life is sacred and strongly advocates against abortion – but the story is even more personal for Vander Woude. The 47-year-old priest has a brother, Joseph, who has Down syndrome.
The priest's father, Thomas Vander Woude, died in 2008 after diving in a septic tank to save Joseph, who had fallen in while walking in the backyard.
"With our experience with my little brother Josie, this is something that is close to my heart for sure," said the priest.
More than 70 priests attended Thomas Vander Woude's funeral at Holy Trinity Church, including his eldest son, Thomas Jr., who officiated at the Mass and delivered the homily.
It's not unusual for families to find children with Down syndrome to adopt on social media,  said Diane Grover, founder and president of the International Down Syndrome Coalition. In fact, several of the coalition's board members have adopted children after seeing a Facebook post, she said.
"It's a beautiful way for people to get the information out there," Grover said. After checking to make sure the story was true, the coalition helped spread the word on social media about Vander Woude's message and received hundreds of calls in return, she said.
"Its a good eye-opener for our society to see that so many families value a child with Down syndrome like any other child and want to raise them as their own," said Jon Coleman, president of the National Down Syndrome Society.
"People with Down syndrome are making great strides in living more independently, attending college and working. With the proper support, they can do so much if given the opportunity."
Posted by DSD at 6:00 AM